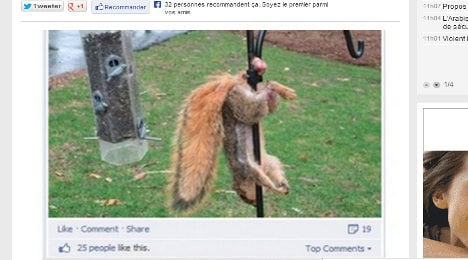 French bank Caisse d’Epargne found itself in a bit of a squeeze on Friday after admitting it had made a balls up of a social media marketing campaign, Europe1 reported.

The Auvergne-Limousin Caisse d'Epargne posted an image to its 24,000 Facebook followers, which captures a squirrel seemingly with its testicles trapped in the frame of a feeding stand hanging upside down as it tries to free some nuts.

The photo was posted with the phrase: “Because accidents don't just happen to others, insurance will also cover you for any temporary injuries”.

Initally, internet users had thought the bank’s page had been targeted by hackers, but when they realized it was in fact the financial institution's own idea, many complained the advert was in bad taste.

"It's absolutely despicable to use this for publicity.  As a customer I completely disapprove. Shame on you," said one disgusted customer.

Within two hours, the bank was forced to pull the photo after it came under fire from customers and online commenters.

“We wanted to make use of the social networks but we made a mistake. It was a communication error. We've hurt Facebook followers and potential customers and we regret it,” said the bank.

The picture worked a treat in creating a buzz on line – just not the type the bank were hoping for. "Poor Caisse d'Epargne squirrel," said one Twitter user. "To be continued in the newspapers from 6.45 this morning!"

What do you think? Were the bank right to pull the image or was it harmless fun?