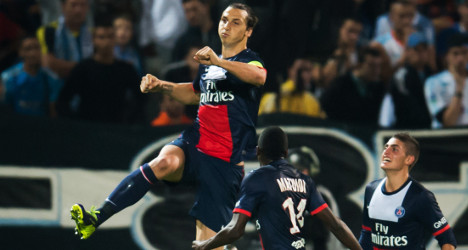 Ibrahimovic is a doubt for PSG's match against Bastia on Friday. Photo: Bertrand Langlois/AFP

Champions Paris Saint-Germain are sweating on the fitness of star striker Zlatan Ibrahimovic ahead of the visit of Bastia on Saturday.

PSG trail big-spending rivals Monaco on goal difference at the top of a Ligue 1 table increasingly developing into a two-horse race, already at this early stage of the season.

Those two remain the only unbeaten sides after nine games and have both returned from the Velodrome cauldron with maximum points from a trip to their only potential challengers, Marseille.

But the news is not good for PSG as Ibrahimovic was injured when playing for Sweden last Friday.

He started training on his own on Thursday but the thigh problem could yet see him miss Saturday's match.

It would be a further blow for the Parisians, who will already be without suspended midfield pair Thiago Motta, who was sent-off against Marseille, and Marco Verratti, whose booking against the same team led to his ban.

Brazilian centre-back Marquinhos insists, though, that the champions have the squad to make light of any absences.

"They (Motta and Verratti) are two very important players for us but we have a big squad with quality players to replace them and in whom we have every bit of faith," he said.

While they may be missing certain players, PSG can count on a rapidly improving Marquinhos, who said he was fatigued when he first arrived at the club from Roma at the start of the season.

"It was very difficult for me. I was out of condition when I arrived," he said

"Physically (I'm now at 100 percent), yes, and mentally. But I still think I can improve a lot. I'm keeping my feet on the ground and continuing to improve."

Marquinhos, who cost 30 million euros ($41 million) from Roma even though he is still only 19, has one eye on earning a World Cup berth with his country.

"Why not? I have to dream and believe in myself. To play in the World Cup in my home country would be a dream," he added.

Bastia are also likely to be without a crucial player in former PSG goalkeeper Mickael Landreau, who is suffering from a hamstring problem

Landreau is closing in on the record number of Ligue 1 appearances held by former Monaco goalkeeper Jean-Luc Ettori.

He has 596 compared to Ettori's 602 and is set to break the record at the beginning of December should he play every one of Bastia's matches until then.

Such matters won't concern PSG, though, who are simply looking for three points to ensure Monaco, who travel to second-from-bottom Sochaux on Sunday, do not get away from them

Monaco look set to recall France midfielder Jeremy Toulalan, who has been out since the beginning of September with a groin strain.

"I've been through a physical training programme and I'm better now, I'm ready to play," he said.

In other matches, Marseille were looking to bounce back to form following their home defeat to PSG in the Cote d'Azur derby away to Nice in Friday night's early game.

Marseille coach Elie Baup was expecting to have striker Andre-Pierre Gignac fit again after a toe injury, although winger Dimitri Payet was suspended.

Nice's greatest worry was over the state of their pitch at the Allianz Riviera following the French Top 14 rugby match between Toulon and Clermont played there on October 5.

Nice would draw level on points with fourth-placed Marseille with victory.