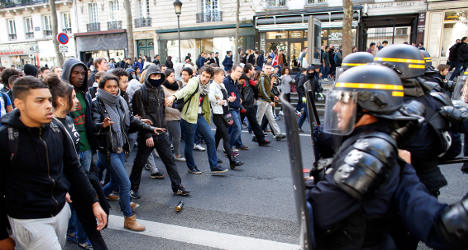 Several thousand students marched through the streets of the French capital, after having blocked the entrance to several schools and disrupted the smooth running of other establishments.

Police put the total number of young protesters at 2,500, while the FIDL high school union said there were around 7,000.

They protested the eviction of both Dibrani and Khatchik Kachatryan, a 19-year-old Paris student who was also deported on Saturday to Armenia.

"Bring back Khatchik and Leonarda, they belong here," the marching pupils chanted, holding up signs calling for Valls to resign or urging solidarity. There were reports of police using tear gas as the protests threatened to boil over.

The protest movement also spread to other parts of the country. In the southern town of Mende, around 100 students demonstrated under the slogan "Leonarda isn't going to class, nor are we."

There have been calls for further marches totake place on Friday, where organisers are calling for university students and teachers to join school pupils. Protesters are expected to rally at Place de la Bastille at 1pm.

Thursday protest began when school pupils blocked the entrance to several high schools (lycées) in Paris demanding an end to the expulsion of foreign students. In all 14 schools were hit by protests, the local authority said.

Picket lines were formed outside the high schools Maurice Ravel, Helene-Boucher, Charlemagne and Sophie-Germain and Turgot,  where students held banners aloft that read "No to expulsions!".

The protest comes a day after the French government came under fire for forcing a 15-year-old pupil Leonarda Dibrani off a school bus on a trip and deported her to Kosovo.

Steven Nassiri, spokesman of the FIDL high school union, told AFP the students were protesting to demand the return of foreign pupils who had been thrown out of France. "Everyone has the right to an education," he said.

Apart from Dibrani, the eviction of another student has emerged. Khatchik Kachatryan, 19, a student in the Camille-Jenatzy school in Paris, was deported on Saturday to Armenia.

Interior Minister Manuel Valls has come under fire from his own Socialist party following the deportation of Dibrani on October 9 in the eastern town of Levier, which only came to light this week when an NGO highlighted the incident.

The exact circumstances in which the girl was taken off the school bus remained unclear but both the interior ministry's version and the account of a teacher agree that her arrest did not take place in view of other pupils.

Speaking after the incident Dibrani's teacher told Mediapart news site that she received a call from the mayor of nearby Levier, ordering her to stop the bus "immediately."

How a a Roma girl became a French 'symbol' Opposition lawmakers have by-and-large backed Valls, warning that a decision to reverse the eviction would send out a damaging message that illegal immigrants were welcome in France.

The controversy follows an outcry last month over remarks by Valls in which he said most of the 20,000 Roma in France had no intention of integrating and should be sent back to their countries of origin.