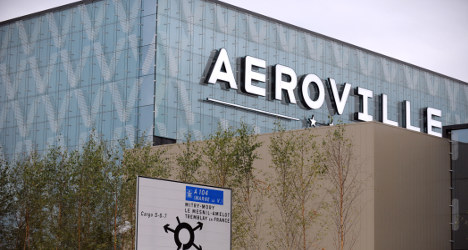 View of a part of the Aeroville shopping centre in Tremblay-en-France near Roissy Charles de Gaulle Airport. Photo: Eric Piermont/AFP

If you are not happy with the quality of duty free shopping at Charles de Gaulle airport, you now have a brand spanking new alternative place to pick up last minute presents for family and friends before you fly off from Paris. Although you'll have to get the airport a little earlier of course.

The €355 million Aeroville, which was inaugurated on Wednesday, has been a long time coming – eight years in fact but Unibail-Radamco, the owners of Aeroville are hoping it will be all be worth the wait.

They describe it as “the biggest shopping centre to open in the Paris region of Ile-de-France in 20 years”.

The centre has space for 200 boutiques, 98 percent of which are already occupied and if you walk around the whole centre you will cover a distance of 1.2 kilometres.

There are also 30 restaurants in the centre with indoor terraces, which is in stark contrast to few dining options available at Charles de Gaulle airport itself. Aeroville is designed to entice those who travel to Paris on business and spend one or two nights in hotels near the airport as well as the 120,000 people who work in various capacities at Charles de Gaulle.

It is also hoped the hundreds of thousands of people from France and abroad who visit the trade shows at nearby Villepinte each year will also be attracted in to Aeroville. There’s also the 1.8 million residents who live within a 30 minute drive of the centre who should help to pay backthe €355 million bill.

Another important factor that will help bring in the euros is that because the centre is built in the airport zone it will be able to open on Sunday’s without breaking the law.

This will no doubt cause anger among the French workers who recently protested, demanding the right to be able to open on Sundays.

There’s also a huge cinema complex, so missing a late night flight, might not be so bad in future. The cinema is operated by French director Luc Besson’s EuropaCorp company and includes 12 screens and a restaurant.

Aeroville is open from 10am to 8pm everyday of the week. For more information on how to get there CLICK HERE.