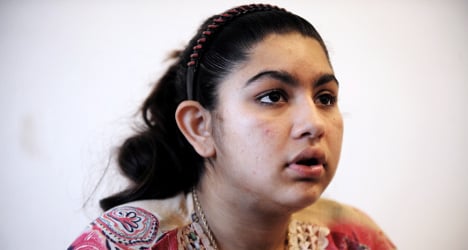 “Things were better in France. My friends, my teachers, my boyfriend…I had everything there. I had integrated well there. France is my country." Leonarda Dibrani. Photo: Armend Nimani/AFP

She is a 15-year-old girl, allegedly originally from Kosovo, and a member of the Roma community who arrived in France in 2009.

This week a French NGO revealed that on October 9th, Dibrani was kicked off a bus in the middle of a school trip in eastern France, and deported with the rest of her family that day.

The news unleashed a tidal wave of anger and disbelief among leading French politicians, activists, and especially among French high-school students.

On Thursday they blockaded schools across Paris, engaged in impromptu protests in the capital, where there were reports of clashes with riot police, and some even began a hunger strike in solidarity with the deported schoolgirl.

High-school students blockade a Paris lycée with signs saying "No to deportation for those without papers." Photo: Kenzo Tribouillard/AFP

Well, Dibrani has appeared everywhere in France this week. On the front pages of newspapers, on placards held by protesting students. The reaction to her expulsion suggests it could be a watershed moment in France’s long-running inner turmoil over policy towards the Roma community and immigration in general.

The episode has also provoked something of a crisis within the governing Socialist party, whose Interior Minister Manuel Valls defended the decision to expel the Dibrani family, though promised an investigation into how it was handled.

Reflecting the majority of public sentiment, senior Socialist politician and president of the National Assembly Claude Bartolone on Wednesday said: “There is the law. But there are also values which the Left cannot compromise, on pain of losing its soul.”

Why is it such a big deal? Aren’t there plenty of immigrants deported from France every year?

Yes, many. Last year 36,822 people were deported, according to AFP. But the manner in which Leonarda was taken, crying, from her friends on a school trip, as well as her own personality, have contributed to this becoming a possible milestone. Her case has also coincided with that of Khatchik Kachatryan, a 19-year-old Paris student who was also deported on Saturday to Armenia.

First there was the moving testimony of Dibrani’s teacher, Madame Giacoma, who was with Dibrani when French border police – with the complicity of the local mayor – tracked down the school bus on October 9th.

Giacoma told investigative website Mediapart that she received a call that morning from the mayor of nearby Levier, ordering her to stop the bus "immediately."

"At first I refused…but he passed me on to a border police agent…whose language was more firm and direct, and he told me we had no choice but to stop the bus, so they could pick up a pupil who was in an irregular [immigration] situation," the teacher claimed.

Has Dibrani said anything herself about the whole affair?

Yes. In fact, it was after the character of Dibrani herself began to emerge, that she became, as one French newspaper called her on Thursday “a symbol.”

Speaking from Mitrovica in northern Kosovo, Dibrani on Wednesday told France Inter radio: “It hurt my heart to have to leave behind my friends, my school, everyone.”

“Here [in Kosovo] we sleep outside, we sleep under bridges, and I can’t even go to school. All I want is to return with my family to France and start back at school so I can have a future. The most important thing is school,” she added.

Sympathy for Dibrani swelled after she told RTL radio she had considered killing herself after being deported, and declared her love and allegiance for the country whose authorities had expelled her.

“I thought about killing myself. I did cut my veins, but it was nothing too serious. The doctor saw me and gave me some pills,” she said.

“Things were better in France. My friends, my teachers, my boyfriend…I had everything there. I had integrated well there. France is my country,” she added.

Speaking to AFP she outlined just how at-home she felt in France. “I was free there. I can’t stay here [in Kosovo]…I’m scared, I don’t speak the language…I don’t know anyone…and I don’t even want to leave the house…If God exists, we’ll be on the first plane back to France,” she said.

Leonarda Dibrani with her family in Kosovo. Photo: Armend Nimani/AFP

Has anyone come out in support of her deportation?

Absolutely. It should be noted that under French law as it stands, the deportation order appears to have been legitimate. After arriving in France illegally in 2009, the Dibrani family applied for asylum on two occasions, but both were rejected, according to Libération.

In fact, in a twist in the saga, Dibrani's father Resat – allegedly question by police last month over reports he had beaten his wife and children – on Thursday made an extraordinary claim.

He told Reuters his children had in fact been born in Italy, and that he had lied to French authorities, saying they were Kosovan, in order to be granted asylum.

Calling for "everyone to keep their cool,” Interior Minister Valls said: "Do not doubt for a moment that the laws are applied with intelligence, insight and humanity."

He defended the “strict application of deportation decisions while ensuring the strict compliance with the rights of immigrants, who are subject to expulsion orders."

Others, such as this Twitter user, have condemned supporters of Leonarda as being overly-emotional, and emphasised that French law must be implemented. "I'm fed-up with these left-wingers who follow their emotions instead of the law. Yes – I'm proud to support Manuel Valls."

What has infuriated the French public is the way it was executed.

It has also been noted that Dibrani appears to be a hard-working, ambitious, French-speaking, well-integrated refutation of Interior Minister Valls’s recent claims that Roma were unwilling and unable to integrate into French society.

“Their way of life is extremely different from ours,” he said, adding that “the majority of them should be sent back to the borders.”

For now at least, that's where Leonarda Dibrani will stay, but her deportation may well end up being a turning point in France's complicated relationship with the Roma people. 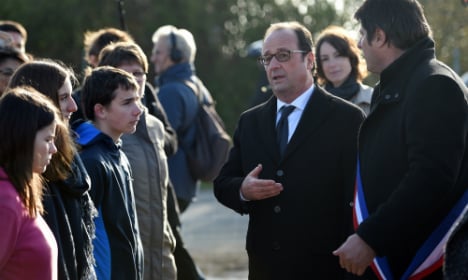 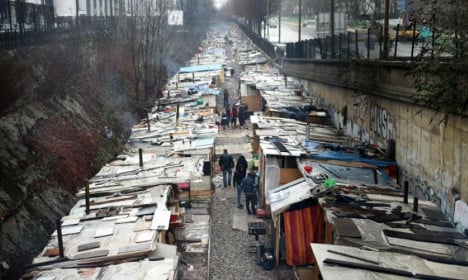