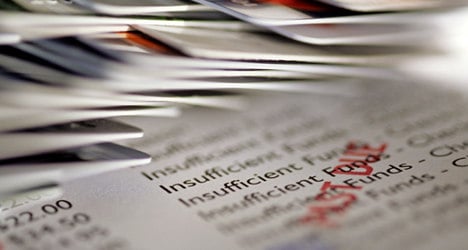 What happens if you go bankrupt in France? And how can avoid it? Photo: Jim Corwin

Starting a new life and a new business in France is an exciting prospect that has attracted expats here for many years.

But needless to say, things don’t always go as planned, even you’re experienced and organized. With bankruptcies at record levels in France, The Local has consulted an expert – himself an expat business-owner – to guide you through the process.

Andrew Denison is an associate at ‘Mon Ami Andy’, a Nice-based consultancy firm dedicated to helping expats in France “get unstuck” from financial and bureaucratic problems.

Being over-indebted on a personal level (“surendettement”), quite simply means you can’t pay your creditors the money you owe them.

A “Commission de surendettement” will be convened, comprising you and anyone or any institution you’re in debt to, to try to figure out a payment plan. In most cases, however, such efforts will already have failed, and the next step is called “redressement.”

Unlike in the US, UK and Germany, ‘redressement’ is voluntary in France, Denison notes, and involves a 12-month commitment to sell off your assets – your car, your house –  in an effort to pay off your debts.

The advantage of this process, according to Denison, is that the Commission de surendettement is very much a “conciliation panel.” And if you make a full-faith effort to pay or sell off your debts, for one year, at that point the slate should be wiped clean, and whatever debt remains is written off as a loss.

However, the major disadvantage is that in most cases your name will be placed on an “over-indebtedness blacklist” by the Banque de France. “This could prevent you getting credit or taking out loans for eight years,” warns Dennison.

The majority of over-indebtedness cases are due to mortgage defaults, Dennison notes, but the largest debts come from consumer credit, where individuals have racked up unpayable debts to several credit card companies by buying furniture, electronics, and so on, which they couldn’t afford.

The redressement process in consumer cases can take longer than 12 months of selling off assets, but in the end often prevents your name being put on a ‘surendettement’ blacklist for years, he says.

If you decide you don’t want to sell off your car or house to pay your debts, you do have the option of earning your way out. Here, a certain agreed proportion of your wages will automatically be paid to your creditors.

Be aware though, they’re not obliged to agree to this, and – although it’s rare – creditors have been known to take people to court to reclaim debts through asset sales.

If things are going badly for your company, at a certain point you will sit down and have a “very serious conversation” with your accountant, who will inform you that the company simply isn’t sustainable any longer.

At this point, it’s time for what’s called the “dépot de bilan.” You and your accountant work out your final accounts, and if you can pay your debts, you do, but in the likely event you cannot, a liquidator is appointed.

Generally this stage is called ‘voluntary administration’, although in cases where there is suspicion of fraud or embezzlement on your part, you may end up in ‘judicial administration,’ a very serious predicament with criminal repercussions.

The liquidator (administrator) essentially becomes the director of your company, says Denison, and once they’re in place, there aren’t really any decisions you can make about your business.

The liquidator will first try to sell the company. If they can’t, they will pursue anyone who owes you money. Then, they’ll try to sell off the company’s assets – company cars, office furniture, and so on.

When it comes to outgoings – in France the employees (if you have any) will always be paid first. The liquidator is responsible for terminating contracts properly, and obeying French labour law in terms of severance packages, and so on. Note that you, as the managing director, will effectively be fired.

Next, the liquidator will pay what the company owes to the state, through Social Security, and in taxes, before trying to negotiate with creditors like banks, with the overall aim of trying to break even.

1. Find an excellent accountant. You might be used to doing your own accounts back home, but remember, in France your accountant is a far more crucial figure.

“Find someone who’s well-recommended, who will give you regular feedback, tell you what’s going on and what’s ahead at all times, and that you can really trust,” says Denison.

2. The Centre de Formalité. When you first register your company in France, you’ll be offered free management workshops and courses (usually a couple of weeks long) at a Centre de Formalité, which is run by your local Chambre de Commerce.

“They are invaluable, and they’re free of charge, so take advantage of them, especially if you have any intention of employing someone,” says Denison.

3. Don’t cut corners with bureaucracy. In France, there can be many more government bodies and agencies that you have obligations to, than you might think. Stay on top which forms go to which addresses, and keep a strict schedule of payments and deadlines.

“Whatever you do,” warns Denison, “do not try to defraud the French government by hiding income earned in different countries, or registering employees back home.”

It will catch up with you in the end, he says, and it can destroy a business you may have worked decades to build.

Andrew Denison is an associate at Mon Ami Andy, a Nice-based consultancy which helps expats in France deal with problems like visas, starting a business, and owning property.