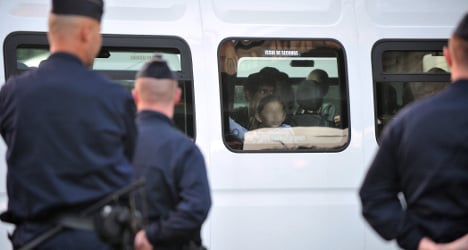 Just as the latest furore surrounding France and its treatment of the Roma community appeared to have died down, more controversy was sparked this week when a schoolgirl was pulled off a bus during a school trip and expelled back to Kosovo.

Along with her family, Leonarda, 15, who was studying at a school in Doubs, eastern France and her family were due to be deported from France on October 9th. But when French police arrived at the family home on that day, the young girl was not there.

The girl, who the French media describe as Roma, was actually on a bus with her classmates for a school trip. Officers decided not to wait until she had returned and decided to pull the girl off the trip.

Her teacher, named as Madame Giacoma, told investigative website Mediapart that she received a call from the mayor of nearby Levier, ordering her to stop the bus "immediately."

Leonarda, after her deportation to Kosovo. Photo: Armend Nimani/AFP

The incident has made headlines across France and angered many in the ruling Socialist party, whose spokesman described it as “shocking”.

”Being taken off a bus by police in front of all her classmates is unbearable and unacceptable,” said David Assouline, a spokesman for the Socialist Party.

“The circumstances that led local authorities to take this decision must be clearly established,” he added.

Socialist MP Pouria Amirshahi also expressed his “dismay” and demanded the “immediate return of Leonarda and her family to France”.

And other socialists took to Twitter to express their anger. "The arrest of Leonarda is scandalous and unjustifiable. The prefecture must be summoned and punished," said Paris MP Sandrine Mazetier.

'Laws were applied with intelligence, insight and humanity'

Once again France’s Interior Minister Manuel Valls, who caused outrage last month when he accused the Roma of not wanting to integrate in France, was forced to put his head above the parapet to defend the actions the French police.

In a response to the uproar Valls ordered an official investigation into the incident on Thursday and he tried to calm the controversy around the incident by calling for "everyone to keep their cool".

"Do not doubt for a moment that the laws are applied with intelligence, insight and humanity," he said.

On Tuesday the minister defended the “strict application of deportation decisions while ensuring the strict compliance with the rights of immigrants, who are subject to expulsion orders" but on Thursday he ordered an investigation into the incident.

Giving his version of the incident Valls said: “A member of the family support group called the girl on her cell phone. It was agreed between the family, the representative from the Support Committee, the teacher in charge of the trip and the police to allow the girl to rejoin her family as they were deported."

“The girl got off the bus to wait for the officials who came to take her away,” Valls added.