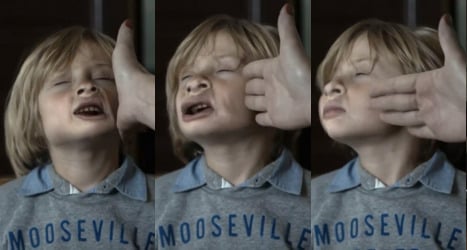 The court in the central city of Limoges heard that the father wanted to teach his son a lesson because the youngster "had stopped saying hello in the morning".

“I told him he should respect me and yes I gave him a spanking,” the father said, according to local newspaper Le Populaire.

The father admitted spanking the boy’s bottom, known in France simply as a “fessée”. In court he defended his actions, saying he was against the "current fashion" of parenting that stops adults from "correcting children".

The court's ruling has made waves in France, where unlike 23 other countries in the European Union, there is no actual law banning spanking or other forms of corporal punishment. French law tolerates the “right of correction” of children by family members.

The verdict has seemingly left many confused about the law with several news sites chosingto reming readers what is and isn't illegal when it comes to striking children.

"Can parents spank their children," was the title of one article on the Europe1 news site (see below). The court in Limoges decided however, that his use of force was “violent” and an “act of humiliation for the child” and handed the father a suspended €500 fine.

“Fortunately we are no longer in an era when parents and teachers inflict physical punishment. This is a by-gone era,” said deputy prosecutor Jean-Paul Lescat.

After a British children’s rights charity lodged a complaint against France over its failure to ban corporal punishment with the European Committee of Social Rights, Paris responded by insisting the penal code, which prohibits the abuse of a minors, is adequate to defend the rights of children.

After the verdict against the father many are now pointing out that France is behind the rest of Europe.

Under pressure from Brussels may countries in Europe have either banned or are in the process of prohiting spanking or any kind of corporal punishment. France therefore appears increasingly isolated with its refusal to change the law.

Scandinavian countries as well as Germany, Spain and Portugal, Italy and Austria have an outright ban where as the Czech Republic and Slovakia are considering a ban. In France, Belgium and Switzerland smacking is only allowed in the context of a family.

The UK has a similar law, in that it is illegal to inflict injuries causing more than a temporary reddening of the skin.

According to the organisation Union of Families in Europe (UFE), France is one of the few European Countries where it is believed that “spanking is an educational method”, French newspaper Liberation noted.

A recent poll by UFE revealed that 87 percent of French parents admitted having slapped their child at least once.

There's no such thing as a little smack'

Earlier this year Dr Gilles Lazimi, who is leading a campaign by the Foundation for Childhood in France for a new law to be introduced banning corporal punishment, told The Local: “There’s no such thing as a little smack”.