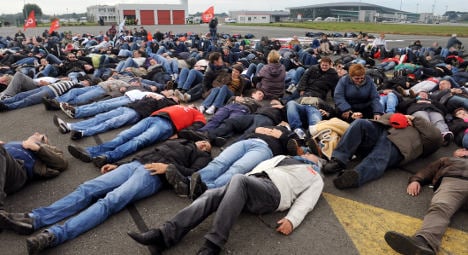 "What's happening in Brittany is a masssacre". Protesters lie down at Brest airport in a silent protest over local job cuts. Photo: Fred Tanneau/AFP

Union members blockaded the airport at Brest, in Brittany, western France on Monday morning before heading onto the runway and lying down in silent protest at the culling of nearly 900 jobs at a local abattoir.

“What is happening in Brittany is a massacre,” said Corinne Nicole, a CGT union rep. According to her thousands of jobs are in danger.

Olivier le Bras, a union rep from the abattoir GAD, where up to 900 jobs are in danger said: “We warned politicians both on the right and left two years ago about the size of the social tsunami that was going to hit us. There is only one solution left for us. It is to reunite and fight.”

The protest had knock-on effects for air traffic in the region with two Paris bound flights cancelled as well as a flight to Brest from the French capital. Two other flights were rerouted to the nearby airport at Quimper.

Protests are set to continue on Wednesday with The Breton Association of Food Processing Businesses (ABEA) calling members to “raise the alarm”, by setting off fire alarms at the work places.

Earlier this year Brittany witnessed a series of ‘cracking’ protests by poultry farmers in the region who set about smashing hundreds of thousands of eggs in anger at low costs.