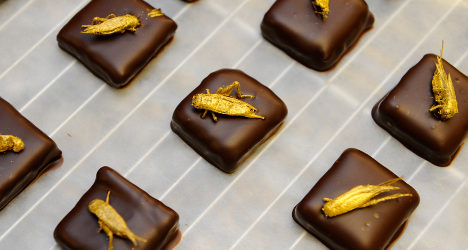 If there is one country in Europe where the locals might be adventurous enough to take to eating bugs and worms, then you would think it would be France, where the likes of snails and frogs legs are national delicacies.

Sylvain Musquar, a chocolate maker from Nancy in the east of France, believes he has come up with the perfect way to get French people eating crickets and worms.

Musquar’s recipe is fairly simple: A square chocolate made from Almonds, hazelnuts, peanuts and sugar, topped with a sugar coated cricket or a maggot “to make it a little sexier”.

“You shouldn’t look too much with your eyes, or you won’t eat them,” said Musquar,

Musquar, says the crunchiness of the insect and the nuts can “seduce” the customer.

Cedric Auriol, the co-founder of a French start-up company in Toulouse, which processes insects for consumption, said he was inspired by a 2011 United Nations report that suggested insects and bugs, which are rich in nutrients, could help alleviate hunger in the world. “This is why we opted for boiling and then dehydration rather than frying the bugs, which would affect their qualities,” said Auriol.

The chocolatier is believed to be the first in France to combine chocolate and insects and has done so just in time for Christmas.

So if you are round for dinner with French friends during the coming festive season, you may find yourself offered this new “French delicacy”.

When it comes to the crunch, will you try it?