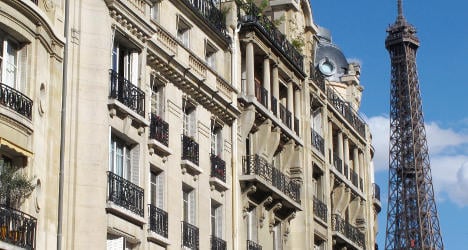 Paris is the third most expensive city in Europe for student accomodation/ Photo: Thomas Coex/AFP

Students who have ever studied in Paris will testify that the French capital is not the cheapest when it comes to the cost of living and in particular accommodation.

One of the reasons why flat hunting can quickly become a nightmare for students in Paris can be partly explained simply by the exorbitant cost of lodgings.

A new set of rankings published this week that listed the most expensive capital cities in Europe for student accommodation, confirmed that Paris is one of the dearest.

The French capital came in third place, with an average a 20 metre square studio flat setting a student back €740 a month.

That put Paris just behind Moscow, where a studio costs €756 a month and table topping London where the equivalent accommodation costs €782 per month.

The order of the top three may be no surprise to most, but what may raise a few eyebrows of people mulling a possible year-out at a university in Europe is how much more expensive Paris is compared to other major cities – most notably Berlin.

Rents in the French capital for a studio are 42 percent above the European average. In the recent rankings of the best towns and cities in France to become a student, Paris did not even make the top ten, due in the main to the steep cost of accommodation.

However it is worth noting that some parts of Paris area clearly more expensive than others, which helps to skew the figures somewhat.

The 5th, 6th and 16th arrrondissements, which have the highest student populations because of their proximity to universities, are home to the most expensive studios.

SEE ALSO: Top tips for finding a flat in Paris

On the other hand the cheaper 18th and 19th arrondissements offer much more affordable accommodation and are becoming more popular with those, who simply cannot afford to live in student areas.

If you want to study in France but are put off by the cost of a flat in Paris you should consider some statistics quoted in Le Figaro on Monday.

It costs students €3,600 a year less to study outside Paris and you can rent a 50 metre square flat in another French city for the same price of a 20 metre square studio in Paris,” the newspaper says.

And it's not as if Paris is the only city in France for students.

Click here to find out the Top Ten best places in France to study. See below for the full table:

The survey was carried out by the website Location.etudiante.fr which compared the cost of 75 studio flats between 18 and 22 metre squared in each European capital.