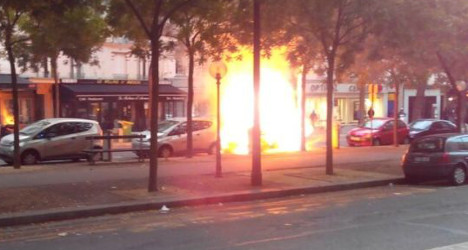 The 4,000-strong fleet of Blue Cars belonging to Paris’s flagship car-sharing scheme Autolib' were left two down on Monday after one exploded at a docking station in the east of the city and another went up in smoke.

The two cars caught ablaze at around 9am this morning on Boulevard de Charonne in the 20th Arrondissement of the capital.

The explosion and the subsequent fires were witnessed by several people who passed on their photographs to The Local.

"I was on my way to work, when there were explosions like fireworks in one of the cars. A fire then took hold of a second car. Fireman were not able to get near the blaze because of the traffic jams,” one eye-witness told The Local.

Another eyewitness Thomas Zaruba joked to The Local: "Last week I was offered a 50 percent discount if I signed up to Autolib and now two out four cars have been burnt to ashes."

Bolloré the firm which runs the Autolib' system has said the source of the explosion came from "outside" the vehicle, in other words suggesting that vandals were to blame. Le Figaro newspaper reports that there was no indication of abnormal heat from the car's batteries shortly before the fires. Police have launched an investigation.

Shortly after the launch of the pioneering electric cars, which made headlines across the world when in October 2011, The Local reported how vandals were targeting the cars, forcing Autolib' to withdraw many from service. With the two cars burned out on Monday, Le Figaro puts the total number of Blue Cars damaged by fire since the launch of Autolib' at 25.

Last month The Local reported how Autolib' had filed an industrial espionage complaint against BMW, after employees alleged the German car giant had sent "spies" to check out their electric cars.

The Autolib' scheme is based on Paris's bike sharing system known as Velib, which has has been hit hard by vandals and thieves in recent months. Users of Autolib' can rent and return one of the more than 4,000 Bluecars for as little as €9 for half an hour, or as much as €120 for an annual subscription of unlimited journeys of up to 30 minutes.

Since launching in Paris, the scheme has come to the eastern city of Lyon, and is slated to arrive in Bordeaux, south-western France in November.

After that, plans are afoot to bring the all-electric car-sharing scheme to the US city of Indianapolis in 2014.