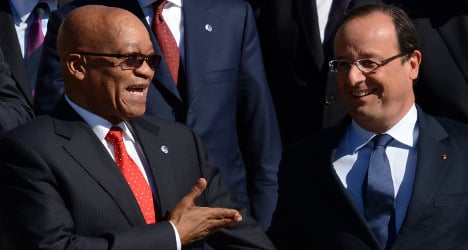 Economic ties will also dominate talks between Hollande and his South African counterpart Jacob Zuma on Monday, with the two nations due to sign accords including one on developing South Africa's nuclear power.

France will also grant energy-strapped South Africa's power giant Eskom a loan of €100 million ($130 million) for the construction of a solar power station and a wind farm.

Hollande flew into Johannesburg early on Monday and was due to hold a meeting with Zuma shortly afterwards.

The visit is the first by a French leader since Nicolas Sarkozy travelled to Africa's largest economy in 2008 as part of a drive to seek new partnerships beyond France's former colonies.

France is still heavily involved in security and peacekeeping in its former colonies where it has often stepped in militarily.

However Hollande has tried hard to shrug off the negative image of "France-Afrique", a term used to describe the secretive use of political and economic influence between elites in France and former colonies.

France, a "big player" in Africa,  is trying to "get South Africa to be playing a stronger role in continental security efforts," said David Hornsby, a lecturer at the University of the Witwatersrand.

France "wants to play an active role in the geopolitical future of Africa, and to do it, it needs partners that are strong enough, well established," said political analyst Koffi Kouakou.

"And the only one really who is established… is South Africa. There is no way France can have a strategy (for Africa) ignoring South Africa," he said.

The two countries have often disagreed over how to tackle conflicts such as those in Libya and Ivory Coast.

However French officials say Hollande has maintained close contact with Zuma over the situation in Mali, where French forces intervened against Islamist groups this year.

Another issue of concern is the deeply troubled Central African Republic, stricken by what the United Nations has termed a "total breakdown of law and order" since a bloody coup in March.

South Africa pulled its troops out of the CAR in March after 15 soldiers were killed as the Seleka rebel coalition seized power, and French forces helped with their evacuation.

However tensions arose over French troops' refusal to get involved in the fighting, evidenced by an open letter written by French Ambassador to South Africa Elisabeth Barbier to explain "their political position of non-interference."

French officials are hoping Zuma will use his influence within the African Union to help smooth preparations for a peacekeeping force to be deployed in the troubled state.

In general, France and South Africa have enjoyed warm relations, partly born of the prominent role France played in attempts to isolate the white-minority apartheid regime and close links between their ruling parties – the Socialists and the African National Congress.

Zuma will host a state dinner for the French delegation – including eight ministers and 20 business leaders – on Monday.

On Tuesday, Hollande will visit a plant owned by French pharmaceutical company Sanofi, which manufactures its anti-retroviral and anti-TB drugs in South Africa.

He will then head to Soweto, the Johannesburg township which was a hotbed of resistance against white minority rule, where he will visit anti-apartheid icon Nelson Mandela's former home.

Aides said this was a way of paying homage to the ailing 95-year-old statesman, who is too ill to receive official visitors.

On the economic front, aides to Hollande said some agreements on energy and transport were in the final stages of negotiation but were not sure to be signed during the visit.

French companies are notably awaiting a decision on whether South Africa will go ahead with plans to build more nuclear power stations. 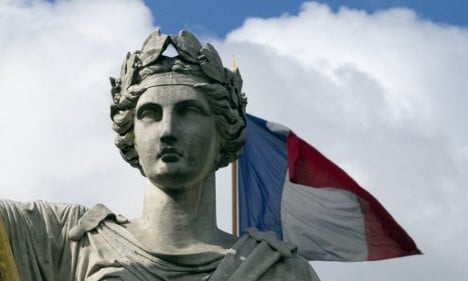 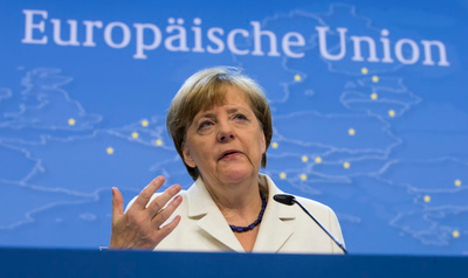