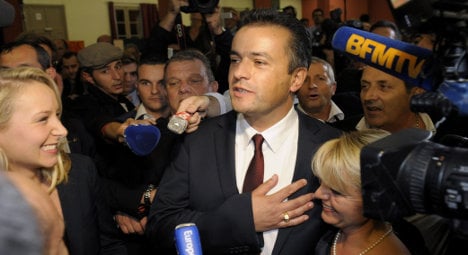 France's far-right Front National(FN) on Sunday won a bellwether by-election, cementing the party's status as a political force to be reckoned with by capitalising on economic gloom and fears of rising crime.

The eurosceptic and anti-immigration party founded by Jean-Marie Le Pen has for years been largely regarded as a pariah in French politics but it has gained significantly in strength and popularity in recent months.

The party's candidate Laurent Lopez garnered 53.9 percent of the vote in the second round of the by-election in the southeastern town of Brignoles, officials in the Var department said.

"I am very happy, it is an unambiguous score," said Lopez of his victory.

When the FN candidate made it into the run-off after the October 6 first round vote, it sent shockwaves across France and prompted calls by the ruling left for a "republican front" to stem the party's progress.

The left, which had no candidates in the Brignoles run-off, had urged voters to choose the centre-right UMP candidate Catherine Delzers, who Var officials said received 46.1 percent of the vote in Sunday's ballot.

Analysts have said that an FN win in Brignoles, whose mayor belongs to the Communist party, could be a significant barometer of the national mood.

In a dramatic boost for the party now led by the founder's daughter Marine Le Pen, a new survey said the FN was tipped to secure 24 percent of the domestic vote in next May's elections for the European Parliament.

The Ifop poll for the Nouvel Observateur magazine said the survey signalled a landmark shift.

"For the first time in a poll on voting intentions in an election of a national character, the FN is clearly ahead of both the (ruling) Socialist Party and the UMP," the main opposition party, Ifop said.

The Socialists were in third place for the European elections at 19 percent, with the UMP trailing behind the FN at 22 percent.

Although Interior Minister Manuel Valls has taken a hard line on immigration, the Socialists are being increasingly perceived as unable to address mounting concerns over insecurity and crime as well as the economic
malaise.

In a reflection of that sentiment, President Francois Hollande's popularity rating has plummeted to an all-time low of 29 percent.

France is grappling with record unemployment of more than three million, a huge budget deficit and slow economic growth.

French Finance Minister Pierre Moscovici on Sunday said it was vital for the ruling Socialists "to preserve and win back the support of the working classes."

It was necessary to "fight the Front National by showing that it brings false solutions and that our economic and social policies deliver results," Moscovici told the Journal du Dimanche weekly.

"The French economy is indisputably in better shape," he said. "France is doing better than the eurozone and better than what was forecast before summer."

With the government suffering from unpopularity, the UMP of former president Nicolas Sarkozy has been wracked by infighting, which could also work to the FN's advantage.

Marine Le Pen has claimed that the FN was now "France's main party".

"The French are showing a wish to take their destiny into their hands and give back their country its sovereignty," FN secretary general Steeve Briois said this week, promising an "unprecedented earthquake" in the European Parliament elections.

Since taking over as FN leader in 2011, Marine Le Pen has tried to broaden the appeal of a party whose image has long been linked to the personality of her 85-year-old father, who has convictions for incitement to racial hatred
and for Holocaust denial.

The FN has expelled overtly racist activists and selected a number of ethnic minority candidates for local elections, as well as increasing its focus on policy issues other than immigration and the EU.