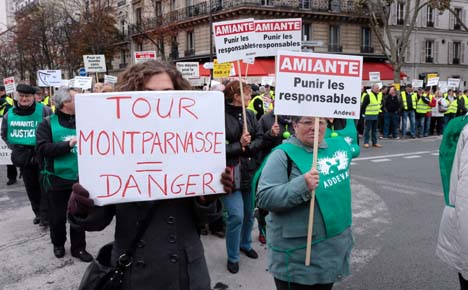 The protesters from all over France lay down in the street outside Sorbonne University in Paris's Latin Quarter to dramatise that asbestos exposure claims 3,000 lives per year, according to organisers.

They had kicked off the march at the Tour Montparnasse, one of the city's few tall buildings, where inspectors have repeatedly found amounts of asbestos dust exceeding allowable levels.

"Ten deaths each day, with no one held responsible or found guilty," one poster read; "For criminal proceedings on asbestos" read another in the march that ended at Paris's main courthouse.

The National Association of Victims of Asbestos (ANDEVA) called the march, which was headed up by relatives of victims of asbestos exposure, mainly widows holding pictures of their husbands.

The protest aims to "show the public and political officials that the victims of asbestos are still waiting for criminal proceedings," ANDEVA said in a statement.

"It has been 17 years since we submitted the first complaints, and there has still not been a criminal trial," ANDEVA vice president Francois Desriaux told AFP.

"The asbestos risk is not ancient history, it still exists today," he said.

"The Tour Montparnasse should have been ridden of its asbestos years ago, but between owners going round the rules and lax police who have looked the other way and allowed the work to be postponed, they are continuing to play with people's lives," ANDEVA said.

In August, Paris police threatened to evacuate the building, where some 5,000 people work.

"Mobilisation is the only way to dent the authorities' passivity," said a woman who works for Amundi, a subsidiary of the bank Credit Agricole, which evacuated its employees from the building in June because of the danger of asbestos exposure.