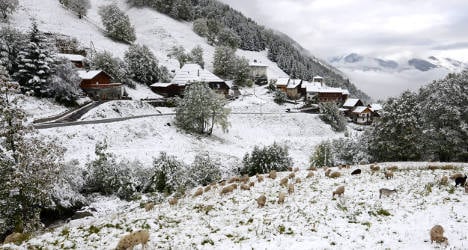 Sheep graze in Celliers, La Léchère, near the French alps, after a heavy snowfall on October 11th, 2013. Photo: Jean-Pierre Clatot/AFP

Out with the t-shirts and mini-skirts. Summer is well and truly in the past in France, as a band of cold weather sweeps the country and brings the first snowfalls to higher ground.

The Alpe d’Huez resort in the Isère region of the Alps woke up to a winter wonderland on Friday after getting a healthy covering of the white stuff over night. Although it was not quite enough for skiers to be able to get out on the piste.

The early snow is being seen as a good sign, however, for the ski season to come. More snow is predicted over the weekend.

“The temperature has clearly fallen in the last three days. A few days ago we were in T-shirts but today we have snow,” said Fabrice Hurt, director of the Tourist Office in Alpe d’Huez.

“The snow will be a wake up call to let people know that they should prepare their Christmas holidays, which will soon be upon us,” Hurt added.

“It’s always nice to see the snow at this time of year. We need to be ready to welcome the first visitors at the beginning of December,” Hurt said.

Of course, Alpe d’Huez wasn't the only resort in the Alps to welcome the first snowfalls. There were reports of up to 80cm falling in some parts of the mountain range. Several roads had to be closed as a result, reported the Metro News site.

“The snow has returned!” exclaimed a statement from the Val Thorens resort.

Do you live near the Alps? Send your snow pics to [email protected] and we'll publish them.