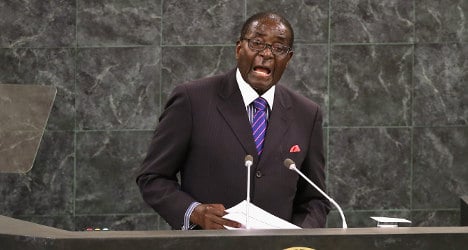 Robert Mugabe: 'I do not want French girls'. Photo Getty/AFP

President Robert Mugabe on Thursday called on European nations to lift sanctions on Zimbabwe in order to boost trade ties.

Speaking while he met new  the new diplomats from France, Germany and Holland, the 89-year-old urged France to consider whether sanctions should be kept in place.

"Can France have a national introspection and see whether it's right to continue to pursue the policy of sanctions against Zimbabwe," he said.

EU countries imposed travel bans and asset freezes on Mugabe, his inner circle and linked companies, following elections in 2002 which western observers said were rigged to hand him victory.

"We must now look at the future and the need for sanctions to go," Mugabe said.

The EU lifted most of its sanctions earlier this year, yet an asset freeze and travel ban remains for the veteran leader.

"We want the removal of economic sanctions so we can export beef to Europe. Let's get to trade," said Mugabe, whose 33-year rule was extended in July polls,said.

"Let our flowers find home in the Netherlands. Let our greens find their way into the Dutch market but for as long as there are sanctions, this will be difficult."

The EU and US, which also has sanctions in place, rejected the recent vote on grounds that the polls were not credible.

Mugabe has threatened western countries with retaliation over the sanctions.