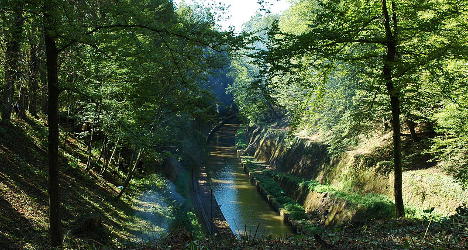 The woman was found in the boot of a car in the Marne–Rhine Canal. Photo: Rolf Krahl/Wikicommons

The 89-year-old told police she was assaulted by hooded intruders at her home in Bar-Le-Duc in the north-eastern region of Lorraine on Thursday morning, who turned her house “upside down”.

“She said she had been surprised in her sleep at dawn, allegedly by two men who questioned and shook her – and even assaulted her – to obtain her bank card and jewellery. Eventually, they bound her hands with an item of clothing and put her in the boot of her vehicle,” prosecutor Rémi Coutin told TF1 television.

The attackers then reportedly pushed the car into the Marne–Rhine Canal in nearby Longeville-en-Barrois, around 5 km away.

In what has been described as a “miracle”, a passing jogger caught sight of the elderly woman trying to escape through the parcel shelf at the back of the car at around 8am. Other joggers then stopped to offer their assistance and alerted workers in the industrial zone by the canal.

A dramatic rescue mission ensued, in which one of the joggers dived into the canal attached to a strap, broke the car window with a hammer before rescuing the victim and bringing her safely back to shore.

“There’s no doubt about it, they wanted to kill this woman. There’s no doubt they wanted the car to fall into the water. The chance that a jogger was passing at that moment suggests a miracle,” the prosecutor Coutin told TF1, adding that the woman’s testimony was “believable”.

The woman was later taken to hospital but her life is not thought to be in danger.

Once she has recovered from the ordeal she will face further questioning, TF1 reported.

The incident is now being investigated by Nancy’s police force and the local urban security brigade.