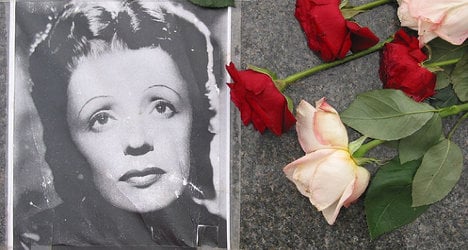 Paris to remember Edith Piaf on the fiftieth anniversary since her death. Photo: Donna Rutherford

Even the Catholic Church, which refused to grant the divorced, hard-living singer a funeral mass following her death, aged 47, on October 10, 1963, has come round to embracing "the little sparrow" with the unmistakeable voice.

A memorial mass, presided over by one of the Paris diocese's auxiliary bishops, will be held at 5:00 pm at St Jean-Baptiste, the parish church in the Belleville district where Piaf was born to – and soon abandoned by – her singer mother.

Loud speakers and giant screens have been rigged up outside the church in which Piaf was baptised to allow as many residents as possible to follow a mass which marks the start of a four-day festival of remembrance in a neighbourhood that remains one of the rougher corners of the otherwise much-gentrified French capital.

Prior to the mass, there will be a silent march from Pere Lachaise, the cemetery where Piaf was buried half a century ago with only a token blessing from a local priest.

It will all seem a very long way removed from the way in which the church reacted to news of Piaf's death, from liver cancer, half a century ago. Then, the Vatican newspaper Osservatore Romano observed that Piaf had lived her life in a "state of public sin" and condemned her as an "idol of prefabricated happiness."

That she was a sinner, Piaf would not have denied. She struggled throughout her life with alcoholism and drug problems, which contributed to three near-fatal car crashes as well as the disease to which she finally succumbed.

Her only child, a daughter born when she was 17, died at the age of two from meningitis, compounded by neglect according to some versions of her pain-filled life story.

Legend has it that Piaf was literally born on the streets of Belleville. Not true, according to a new biography by Robert Belleret, "Piaf, a French Myth." Belleret says the star, who was born Edith Gassion, came into the world via a local hospital on December 15, 1915.

Belleret also dispels stories of Piaf having suffered childhood blindness, which she herself had recycled along with a claim to have been miraculously cured.

The biographer also sheds new light on Piaf's conduct during World War II, during which she lived close to Gestapo headquarters in German-occupied Paris and regularly performed for Nazi officers.

After the war, she faced accusations of having been a collaborator who had lived the drunken high-life while much of the city was starving.

But she escaped with her reputation intact, thanks in no small part to a story – completely made-up according to Belleret – about how she had helped French prisoners to escape from German prison camps by passing on fake papers during singing tours, or by allowing them to have pictures taken with them which they could later use to forge identity documents.

That brush with disaster overcome, Piaf embarked on a post-war career which was to see her conquer America and become a household name in many more corners of the globe thanks to the success of "La Vie en Rose" and "Je ne regrette rien."

She was never, however, able to shake off the shadow of tragedy. The love of her life, married French boxer Marcel Cerdan, died in a plane crash while travelling from Paris to New York to meet her and, in the end, the drink robbed her even of her most precious asset, her voice.