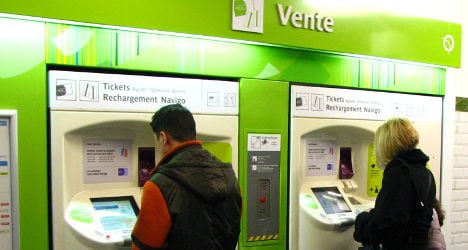 With Paris region transport authorities facing a €4.5 billion bill for the long-awaited Grand Paris ‘supermetro’ scheme, it seems it will be down to users of  public transport in the capital to foot the bill.

In other words passengers on the Metro, RER and bus network will be hit with hefty hikes in fare costs in the coming years.

Meanwhile, a senior Paris politician has warned that a rise in prices, due to the increase in VAT, could cause riots similar to those that hit the streets of Brazil this summer.

STIF, the Ile-de-France region transport syndicate, which sets fare prices, on Wednesday predicted a three-percent hike in the cost of using trains in and around Paris, for 2014.

That means a single Paris Metro ticket would cost €1.75 in 2014. That reflects only a minimal rise on the current price of €1.75 but the pain for travellers and commuters could be much deeper and longer-lasting than that.

According to French daily Le Figaro, the Regional Council of Ile-de-France this week heard a proposal to increase the price of tickets for the Metro, RER and other rail networks, by a whopping 42 percent in the coming 12 years.

The days of affordable, stable train ticket prices in Paris, it seems, could soon be over.

STIF is claiming it has been forced into increasing ticket prices, in order to cover the unexpected shortfall in their coffers that would result if VAT (sales tax) is brought from seven to 10 percent, as predicted, in France’s upcoming budget.

With that in mind, Jean-Paul Huchon, president of both the Regional Council and STIF, has written to French Prime Minister Jean-Marc Ayrault, appealing for him to reconsider the hike in VAT, and warning of possibly dire consequences.

“As well being a basic necessity, public transport is also a fundamental component of the Paris region’s competitiveness,” he said in a letter written last month but leaked to Le Parisien on Thursday.

“An increase [of three percent in VAT] doesn’t seem desirable to me,” Huchon said.

“I’m thinking here of the consequences a similar decision had recently in Rio de Janeiro and Sao Paulo,” he added, referring to the summer’s mass protests and riots in Brazilian cities, sparked by a six-percent hike in public transport costs.

OPINION: 'Grand Paris will benefit the whole of France' The cornerstone of the project is the ‘Grand Paris Express’, dubbed the supermetro – a massive expansion and update of the rail and metro network in and around Paris.

The cost of Grand Paris is estimated at €27 billion, which is around €6 billion more than originally intended.  As well as being over-budget the scheme is also behind schedule and will not now be completed until 2030, five years beyond the original estimated finish.

There was outrage in some quarters when it was revealed that motorists throughout France might be targeted to fund the project with a proposed doubling of parking fines from €17 to €35.

Drivers' advocate Pierre Chasseray told The Local at the time that the plan was "nonsense."

“Motorists are an easy target. Yet again the government is asking drivers to help finance a project they cannot afford," he said.

The question of how to pay for 'Grand Paris' reignited age-old tensions between the commercial and political centre of Paris, and the rest of the country.

In an opinion piece for The Local, Regional Council president Jean-Paul Huchon was defiant, saying "The fact is that for 30 years the Paris region was left abandoned."

“The Grand Paris Express will be an engine for the regional economy, and will benefit the entire French economy as well,” he added.