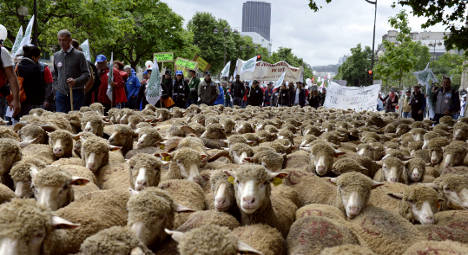 French cattle farmers protest in Paris at the high costs of rearing farm animals. Financial strife is said to be the main reason for the high suicide rate among farmers. Photo Miguel Medina/AFP

Suicide is the third-highest cause of death among French farmers, after cancer and cardio-vascular diseases, a report by the French health institute INVS revealed on Thursday.

In a three year period between 2007 and 2009, 485 farmers took their own lives, which represents a suicide every two days on average. The rate of suicides among farmers is 20 percent higher than among the French population as a whole.

In total, 417 men and 68 women ended their lives during this period, with the mortality rate highest among cattle farmers aged between 45 and 64-years-old.

The INVS study represents the first ever official investigation into the sensitive issue and sheds light on the vulnerability of those working in the beleaguered farming sector in France.

"These figures are shocking," Jean-Bernard Bayard, Vice President of the main French farmer's union FNSEA told The Local on Thursday. "We knew there was a high number of suicides but this study makes it clear how bad the problem has become."

The report even chose to look at the method of suicides, and found that most victims killed themselves by hanging. Male farmers were more likely to turn a gun on themselves, whereas, of the woman who committed suicide, many drowned themselves.

In another statistic that will concern France’s agricultural chiefs, the number of suicides among farmers stands at 35.9 per 100,000, meaning it is the sector in France most affected by the phenomenon. According to Europe1 radio, for factory workers in France the suicide rate stands at 31,8 pour 100.000, for policeman it is 32 out of 100,000,  for doctors it stands at 31 and for the general population it is 16 per 100,000.

In 2008, during the milk crisis in France an INVS study found the risk of suicide among farmers was 47 percent higher than for the average population.

France’s agriculture industry has been hit hard in recent years with many farmers, particularly those raising cattle, struggling to survive as costs rise and profits fall.

Earlier this month, President François Hollande vowed to come to their aid by promising to use a renegotiation of the EU’s Common Agriculture Policy to favour livestock farmers.

"To leave breeders in the situation they are in, with lower incomes than the rest of the profession, but with higher risks and tighter constraints, would be to weaken French agriculture as a whole," the president said.

For French farmers' unions, there were many factors at play, but one stood out above the others.

"We cannot deny that this trend has coincided with difficulties in the industry, especially for cattle and sheep farmers. There are many pressures on the industry and they are becoming greater all the time," FNSEA's Bayard said.

"This report needs to be heeded by the government but also by French society as a whole."

The INVS were also under no doubt that French farmers' struggle to stay afloat financially, was the chief cause of the high suicide rate.

“These acts coincide with the onset of financial problems in this sector over the period studied," said their report.

For Marie-Thérèse Denieul from the Mutualité Sociale Agricole said there were other reasons at play as well as financial difficulties.

“There are three main reasons,” she told Le Figaro. “Social isolation is the most common, then the economic crisis, followed by a proliferation of controls and administrative procedures.”

For his part France’s Minister for Agriculture has vowed to eradicate the worrying trend.

Stéphane Le Foll said he was “aware that the financial difficulties can cause stress” and he promised to “push through specific initiative” aimed at boosting incomes of French farmers.

A further study is to be carried out to see if the suicide trend continued into 2010 and 2011.

The high suicide rate among farmers is simply part of an alarming trend in France, where the rate of people taking their own lives is well above the European average and twice that of the UK and Spain.

Everyday in France an average of 21 men and eight women take their own lives and around 700 attempt it.

Last month The Local spoke to Jean-Claude Delgenes, the director of Technologia, a company which works with highlighting safety concerns for workers. He explained that France's high suicide rate has its origins in history. Click below to read his explanation.

Why does France have such a high suicide rate?