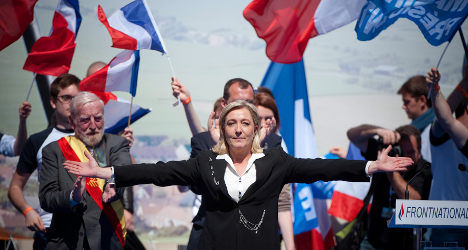 France's National Front are set for a strong showing in the European Elections, a "landmark" poll suggests. Photo: Bertrand Langlois/AFP

France's far-right anti-immigration and anti-EU Front National party is tipped to get 24 percent of the domestic vote in next May's election for the European Parliament, a survey said Wednesday.

The poll came just after the party garnered nearly 50 percent of the vote in a local by-election in a reflection of its rising popularity.

The Ifop survey for the Nouvel Observateur magazine, which polled 1,893 registered French voters on October 4, said the results were a landmark of sorts.

"For the first time in a poll on voting intentions in an election of a national character, the FN is clearly ahead of both the (ruling) Socialist Party and the UMP", the main centre-right opposition party, Ifop said.

The Front National led by Marine Le Pen has gained three percentage points over a similar survey conducted by Ifop in May.

"The French are showing a wish to take their destiny into their hands and give back their country its sovereignty," said FN secretary general Steeve Briois, promising an "unprecedented earthquake" in the elections.

According to the Ifop poll, President Francois Hollande's Socialist party was in third place for the upcoming elections with 19 percent – a two percentage point drop over May.

The centre-right UMP of former president Nicolas Sarkozy came after the FN with 22 percent.

Analysts say a struggling economy, record unemployment and mounting concern over crime have bolstered support for a party that has traditionally appealed to voters on an anti-immigration, anti-EU platform.

Since taking over as the head of the FN in 2011, Marine Le Pen has tried to reposition a party whose image had long been closely linked to the personality of her father, Jean-Marie Le Pen, the target of a string of convictions for incitement to racial hatred and holocaust denial.

Under her leadership, the FN has expelled overtly racist activists and selected a number of ethnic minority candidates for local elections.

Last week The Local reported that Le Pen was threatening to take the somewhat extreme measure of suing journalists who refer to the party as “extreme right”. "We are absolutely not a party of the right, those who think that are making a total analytical error," Le Pen said.

The National Front leader was accused of hypicrisy by certain political analysts.

However, Le Pen has been accused of hypocrisy with her legal threat against the media.

“Prosecuting journalists for the content of their analysis is already in itself an element that helps to qualify a party as extremist,” said political columnist for France Inter, Thomas Legrand, who added that "it is not tactical self-affirmations of party leaders that determines their real position.”