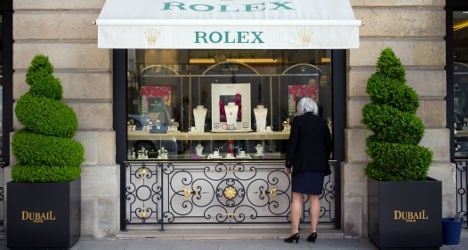 France is home to more millioniares than any other country in Europe. Photo: Lionel Bonaventure/AFP

After all the talk in recent months about France’s most wealthy upping sticks and moving abroad to avoid the notorious tax man, it might come as a surprise to learn that the Hexagon has more millionaires than any country in Europe.

According to the latest study of global wealth by Credit Suisse Research Institute, France has 2, 211 members of the millionaires club in 2013.

That puts France, home to L’Oreal heiress Lilian Bettencourt and Louis Vuitton boss Bernard Arnault, well ahead of Germany, with its 1,735 millionaires and the UK, home to 1,529 millionaires.

Only the USA is home to more millioniares than France with its 13,216.

And even with the prospect of President François Hollande’s proposed 75 percent tax on millionaires, to be paid by companies rather than individuals, the ranks of the rich in France are only set to increase, according to Credit Suisse.

However, even though France may have its fair share of wealthy folk, when it comes to the mega-rich, it is no longer top dog in Europe.

When it comes to those with fortunes over $50 million, France stands behind the UK, Switzerland and Germany.

Neither the UK or Germany make the top ten.

The total wealth of French households is also very sizeable. Although just 1.0% of the world’s adults reside in France, in terms of aggregate household wealth in current USD it ranks fourth among nations – behind China and just ahead of  Germany.

While the news may be good for France’s most wealthy, Credit Suisse’s report on the country makes less pleasant reading for the population as a whole.

Entitled “Uncertain prospects” the study’s report on France says: “Although the euro crisis has receded for the moment, France continues to struggle with high unemployment and low growth.

“Despite these challenges, it remains seventh in the world in terms of household wealth per adult.

“After the turn of the century, wealth per adult grew very strongly in France, almost trebling in USD terms between 2000 and 2007. It then decreased by 15% in 2008.

“Recovery has proved elusive, although the pre-crisis peak was almost overtaken this year.”

France’s country report also states that there is a “greater financial inequality than seen in most other EU countries.”

This remark came as a surprisse to French economist Eric Heyer, from the French Economic Obersvatory.

"Inequlity in terms of wealth is not as bad in France as in other countries. The state plays a greater role here, the  people pay more taxes and therefor there is a greater re-distribution of wealth," Heyer told The Local.

On a global level wealth per household increased by 4.9 percent to €38,188 per adult between mid-2012 and mid-2013. It also forecasts average household wealth will climb 39 percent over the next five years, with most of the wealthiest households being in emerging markets.

''Our research shows that global wealth has doubled since 2000, quite compelling given some of the economic challenges of the last decade," said Michael O'Sullivan of Credit Suisse Research Institute.

"We expect this trend to continue in the foreseeable future, driven largely by Emerging Markets' strong economic growth and rising population levels."

To view the full report click on the image below.