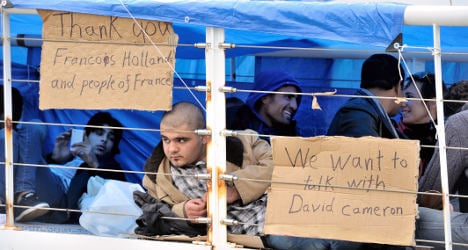 "France is not doing enough to help Syrian refugees fleeing the conflict in their country." Syrians in Calais hold a sign saying, "We want to talk with David Cameron." Photo Philippe Huguen/AFP

With one group of Syrian refugees recently claiming they were treated ‘worse than animals’ in France, and after a French EU official this week warned European countries they should prepare for a “massive influx” of Syrians fleeing the bloody conflict, the arrival of refugees from the Middle East looks set to be a major issue in France in the coming months.

On Thursday The Local spoke to Matthieu Tardis, head of the Secretariat General of France Terre d’Asile, a leading non-profit organisation which provides “legal and social services” to asylum-seekers and refugees in France.

He told us that France was failing to meet its legal obligations to Syrian refugees, and that there was a “moral crisis” in France, regarding refugees and immigration.

How has France been treating Syrian refugees?

Quite simply, France is not doing enough to help and accommodate Syrian refugees fleeing the conflict in their country.

President François Hollande has tried to make France a world leader by getting involved in the conflict in Syria.

But France’s system for welcoming refugees and asylum-seekers displaced by that conflict is just as important to being a proactive participant in the international community.

I think the French people and authorities sometimes misunderstand asylum-seekers and refugees. They see it as an immigration issue, with thousands of people coming over the border into France, to stay permanently.

Of course it’s true that it involves people entering France, but this is a protection issue, not an immigration issue.

The Syrian refugees we speak with are not your typical migrants, looking to start a new life in France. They are in an exceptional position, and most of them simply want to go home as soon as they can.

How France treats Syrian refugees will be a big part of how France helps to resolve the conflict in Syria, and I think there’s a moral crisis in France today when it comes to immigration and asylum-seekers.

What exactly should France be doing for Syrian refugees?

Syria is in conflict at the moment. That means there are special rules and moral and legal obligations that apply to the international community.

A major part of that obligation is housing and health services, and France is simply not providing that properly for refugees.

I understand there has been an economic crisis, and I understand that the welcoming centres are already overcrowded, but that still doesn’t change France’s legal obligation to find a solution and provide accommodation for them.

France receives about 50 or 60,000 asylum applications every year, and those figures have been steady for a while now.

So it’s just false to claim that French authorities have been taken by surprise by the numbers of asylum seekers.

Furthermore, France only grants about 10 percent of those asylum applications, as opposed to the European average of 20 percent.

Another important step France could take is to proactively try to get Syrian refugees from overcrowded camps in Lebanon and elsewhere, and bring them safely to France.

Germany is doing this, so why can’t France?

There are more than two million refugees from Syria currently in camps in Lebanon, Jordan and Turkey, and this is putting a massive burden on these countries.

We’re already hearing stories about trouble on the Greek border with Turkey, where Syrian refugees are trying to enter the EU through Greece.

France could play a big role in alleviating these tensions. Has France done anything to help Syrian refugees?

Of course. Towards the beginning of the conflict in Syria, France was very good about granting what are called “protection visas.”

This means that Syrians fleeing the conflict in their country were given sanctuary on French territory within Syria, in the French embassy.

Also, as is their legal obligation, France has been giving “transit visas” to Syrian refugees. This means that if they want to pass through France to another country, the French authorities have to allow them to do so.

In terms of asylum, France has only received about 800 applications from Syrian citizens this year, and more than 90 percent of those have been granted, and usually processed quite quickly.

It would be unfair to criticize France based on the number of applications it has received. If more Syrian refugees are asking for asylum status in other countries like Germany, that’s their choice.

The Syrian refugees who protested at Calais had family connections in the UK, and generally spoke better English than French. That’s why they were so keen to cross the Channel to go to Britain.

France can’t be blamed for that, but without a doubt, it must do more to welcome, house and help those Syrian refugees who do arrive here.

Matthieu Tardis is head of the Secretariat General at France Terre d’Asile, a leading French non-profit organisation which provides legal and social services to refugees and asylum-seekers in France.

What obligation does France have to Syrian refugees? Join the debate by sharing your views in the comments section below.