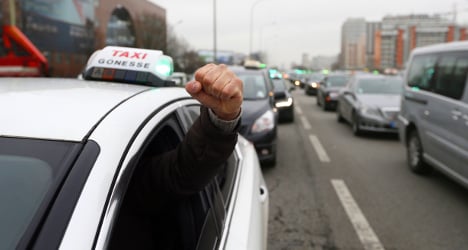 "Anyone wishing to reserve a car ahead of time, would have to register at least 24 hours before their journey, and then wait at least 15 minutes for it to arrive." Photo: Kenzo Tribouillard/AFP

Catching a cab in Paris has never been the easiest of tasks and it appears it will soon become a whole lot more complicated.

The French government on Thursday stepped in  to try to end an increasingly bitter dispute between conventional taxi-drivers and their newer, higher-end rivals, the private hire cab or VTC (véhicule de tourisme avec chauffeur) as they are known in France.

Furthermore, anyone wishing to reserve a car ahead of time, would have to register at least 24 hours before their journey, and then wait at least 15 minutes for it to arrive, no matter how close it might be.

If challenged by Paris police, it will be the responsibility of the private car chauffeur to prove that the booking was made at least 15 minutes earlier, according to French media reports.

This proposal was first mooted during the summer, but was presented jointly on Thursday by the interior and tourism ministries, and should be signed into law on January 1st, as part of a new package of laws on consumption.

Despite the concessions, however, taxi-drivers in the French capital have reacted angrily to the new proposals.

“The authorities have taken a backwards step – those 15 minutes won’t change anything,” Didier Hogrel, president of the National Taxi Federation, told Le Figaro.

“First we wanted it to be one hour, then it became 30 minutes, and in the end it was 15 minutes,” he added.

Conventional taxi-drivers, who have to pay a staggering €200,000 for their licenses, have suffered from the increased competition, since VTCs were introduced in France in 2009.

Taxi chief Hogrel, however, didn't appear to be taking the compromised plan lying down, and wouldn't rule out the use of a tried and trusted French technique to fight the onslaught of competition.

"The unions wouldn't stand in the way of any spontaneous strike actions [by taxi drivers]," he told Le Figaro.