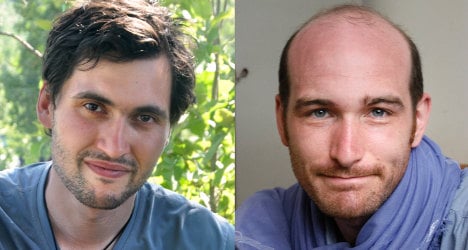 The foreign ministry said in a statement that Nicolas Henin, 37, and Pierre Torres, 29, had been captured on June 22nd, but did not provide any further details.

Their abduction was not initially made public at the request of their families, who said in a statement they had hoped a media blackout might help secure a quick release of the two men.

"But after more than 100 days of waiting, the families and friends of the two journalists wanted to address a message to Nicolas and Pierre to tell them they are doing everything they can to secure their rapid release," a statement from the families said.

However, French Prime Minister Jean-Marc Ayrault appears to have jumped the gun on Wednesday morning, naming Henin and Torres during an interview on Europe 1 radio, which friends of Henin told news website Rue 89 was a gaffe on the part of the PM.

The journalists' families had intended to go public about the kidnapping on Sunday, at the Rencontres de Bayeux, an annual prize-giving ceremony for war journalists, according to Rue 89.

"I was astonished that Ayrault released the news before the moment envisaged by the families," said Eric de Lavarene, an executive at Solas Films, the TV production firm which employed Henin. "It was a bit of a gaffe, it shows a real lack of tact."

The families of Henin and Torres said they would now be working with the families of the two other French journalists detained in Syria, Didier Francois and Edouard Elias.

Francois, a seasoned war reporter for Europe 1 radio, and Elias, a photographer, were detained on June 6th by unknown men at a checkpoint while travelling to Syria's second city of Aleppo.

Henin and Torres disappeared while working in the town of Raqqa in northern Syria.

The most recent message from his Twitter account occurred on June 11th, 11 days before his capture. Henin tells a fellow journalist "I am in Syria. Intermittent internet access."

Torres had covered the 2011 Libyan conflict and was on his second trip to Syria. Among his clients were AFP.

The families of Henin and Torres said they had been informed by the French authorities in August that the two men were still alive, and in his radio appearance on Wednesday morning, Ayrault claimed the French government had "proof they are alive."

Here is a brief clip (in French) of Ayrault making the alleged blunder of releasing the names of Henin and Torres, during an interview with Europe 1 radio on Wednesday. This exchange appears to have since been redacted from Europe 1's transcript of the interview.