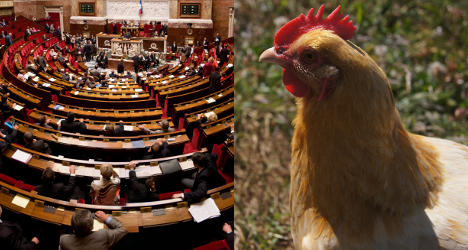 Female Socialist MPs in the French parliament staged a walk-out on Wednesday in a protest against sexism.

Their boycott of the opening of parliament came a day after a 'tipsy' UMP deputy provoked uproar when he made sexist chicken noises at a female MP as she made a speech, causing the parliamentary debate to be suspended.

On Tuesday, as the new pensions bill was being discussed in the lower house, Veronique Massoneau was abused by Philippe Le Ray, a deputy from the centre-right UMP ranks as she presented her amendment.

Le Ray, who was confirmed as the culprit on Wednesday evening, blatantly tried to ruffle Massoneau's feathers when he began making clucking noises, which in turn provoked a furious response from his victim.

“Stop! That’s enough! I am not a chicken,” Massoneau blurted out in anger. The incident was widely denounced as sexist in a country where the word chicken ('poule') is often used as a derogatory term for women.

The leader of the National Assembly Claude Bartolone was furious and denounced the “incredible behaviour”.

But the clucking noises continued throughout Massoneau’s speech, forcing Bartolone to suspend the session.

Le Ray was called to order by the Conference of Assembly Presidents on Wednesday, and fined €1,378 – a quarter of his parliamentary expenses for one month – for his antics.

“There are things I will never accept in this chamber,” said Bartolone. “One of them is deputies pretending to be birds when a Member of Parliament is speaking. It is not acceptable.

“There are certain things which fall within our collective responsibility, so don’t be surprised if the populist parties gain more votes when the public sees their elected representatives behaving like this."

This is not the first time French MPs have failed to cover themselves in glory during a parliamentary debate.

Last year Housing Minister Cécile Duflot was wolf-whistled when she stood up to speak wearing a floral dress.

“We were just admiring her,” UMP deputy Patrick Balkany told French daily Le Figaro at the time. “If she didn’t want us to take an interest in her, then she shouldn’t have changed her look.”

Following the clucking incident, France's government spokeswoman complained on Wednesday of lawmakers partaking in too many "boozy dinners".

"It is regrettable that some people have difficulty maintaining an attitude that is consistent with their functions after obviously boozy dinners," government spokeswoman Najat Vallaud-Belkacem said after a cabinet session.

"Unfortunately we've seen this before," she said. "It shows that we have to continue to fight to have women politicians respected." In a statement, the Socialist Party accused the conservative UMP of living "in the prehistoric era."

Speaking to the Nouvel Observateur news site on Wednesday Massoneau hit out a culture of sexism among French MPs.

“This shows the difficulty a man has living with equality,” she said referring to Le Ray, who Massoneau said has since apologized.

“I do not want to generalise, I work very well with a lot of men but it is always women who are on the end of this type of disrespect. For some of them it is spontaneous. It’s serious because they don’t even realise,” Massoneau added.

“He continued even after being told to stop. Being tipsy is not an excuse. It just shows the deep rooted sexist attitudes in them,” she added.