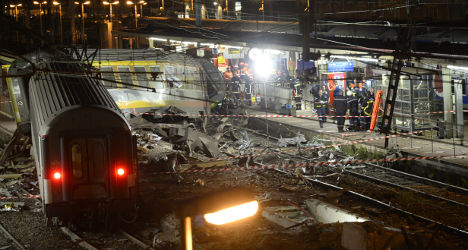 Rescue personnel work through the night at the Bretigny-sur-Orge rail station where a train crash on Friday evening killed six. Photo: Lionel Bonaventure/AFP

French rail chiefs are intent on avoiding any recurrence of the fatal train derailment to the south of Paris in July that left seven people dead and dozens injured. Rail operator SNCF has blamed the accident at Bretigny on a connecting bar that had come loose at a rail switchpoint.

On Tuesday SNCF, the rail operator which runs the trains in France and RFF, which maintains the track network, announced a joint €410 investment plan to upgrade existing tracks.

Under “Vigirail” 500 track switches will be replaced annually compared to 200 which are currently being renewed each year.

The money will also be spent on improving the technology to help monitor maintenance operations.

A program will also be put in place to process and monitor faults that have been reported by members of the public.

On July 18 The Local reported how a retired engineer had warned SNCF over a series of faults on the tracks at Bretigny.

Christian Brochet, a retired 77-year-old engineer from the town of Brétigny-sur-Orge, where last week's fatal crash took place, wrote to France's national rail operator SNCF almost three years ago, warning them that track conditions at the local train station could cause a “catastrophe". Speaking on Tuesday Guillaume Pepy, President of SNCF said: “Vigirail will be carried out over at least four years and aims to improve the switches and the track network for safety reasons."

Pepy also said safety priorities will not be compromised by staff cuts after being accused by union leaders of intending to trim the number of maintenance workers.

“In the coming years our maintenance practices will radically change,” said Jacques Rapoport, president of the RFF.

Earlier this month it was suggested that SNCF had tried to buy off the families of the victims of Bretigny train crash when it emerged they had offered damages of up €50,000 to those affected.

Others, however, commended the rail firm for acting quickly and not waiting for the lengthy legal process to decide how much each victim should receive.

The €50,000 would simply be deducted from whatever amount the courts decide should be paid out to the families of the victims.