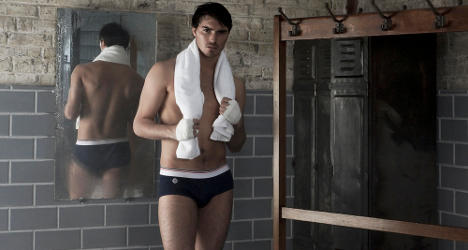 Scented "Made-in-France" underpants, a wind turbine that looks like a tree, customized prosthetic limbs, films, emerging singers… The French projects are snowballing, with several examples of meteoric success and they are all linked by one word – crowdfunding.

This new form of funding, which allows people with project ideas to go online and solicit money directly from other individuals, is fast rising in a country hit hard by the economic crisis, where entrepreneurs are seen as key to kick-starting growth but face considerable financing difficulties.

"Finance participatif" is not something you would associate with France, whose business culture is renowned more for its caution than risk-taking. However the culture appears to be changing and more importantly it is being embraced by the country's government.

"We are the fastest growing sector in France. Crowdfunding can really boost start-ups in France at a time when the economy is struggling," Joachim Dupont, co-founder of crowdfunding platform Anaxago told The Local on Wednesday.

"It's not growing as fast as in the UK where people are generally less risk averse and more connected, but the culture is changing in France.

"People in France are starting to understand that if you invest money on the stock exchange you can lose a lot, but with crowdfunding they can invest in a business they understand, they can meet the CEO etc. It can be a very different story.

Last month, the country's Socialist government announced a series of new proposals aimed at facilitating crowdfunding, which until now was in regulatory limbo.

These include the creation of a new legal status that would ease regulatory burdens for online crowdfunding platforms – a first in Europe according to innovation minister Fleur Pellerin.

"We all know how much banks can be unadventurous, scared of new ideas from inventors and those with projects," Pellerin said at a conference announcing the measures, which if adopted will kick in in early 2014.

"This is a problem, particularly in a context of crisis where we actually need to encourage audacity, and test groundbreaking solutions to create more jobs.

"For young or new entrepreneurs, (for) all those who… refuse to bow to the dictums of banks, crowdfunding is a real boon."

The Socialist government's eagerness to embrace crowdfunding has impressed Anaxago's Dupont, who says France can lead by example.

"We started the first association for crowdfunding in France and have been lobbying the government for nearly a year to introduce a laws to help promote it and regulate it," he said.

"The government has reacted very quickly. We will be the first country in the world to give crowdfunding a legal status, so France will be an example for other countries in the world to follow. It's very positive."

"We intended to regulate crowdfunding sites, and a draft proposal will be presented early next year," the EU's Internal Market Commissioner Michel Barnier told the EurActiv news site.

Clement Scellier, who turned to crowdfunding to help develop his firm Jiminis agrees that crowdfunding can help change business culture in France.

"In France, there's a culture of caution. If you fail with a company, it's almost impossible to get a bank loan again whereas in the United States, it's considered a 'guarantee'… that you won't make the same mistake again," said Scellier.

"Crowdfunding in France is a very good thing, it will make access to funds easier for entrepreneurs."

Globally, the crowdfunding market grew 81 percent in 2012 and raised $2.7 billion, a figure expected to shoot up to $5.1 billion this year, according to research firm Massolution.

North America is by far the leader in this innovative form of funding, which broadly falls under three categories — donation-based financing, peer-to-peer lending and buying equity in a company.

"Made in France" underpants

In France, the trend emerged around 2008 with the rise to fame of Grégoire, a singer who financed his first album via the My Major Company crowdfunding platform.

It has slowly gathered momentum. Some €33 million ($45 million) were raised in the first six months of 2013 – more than the whole of last year – with more to come.

"Growth (in France) will be around 150 percent this year, compared to around 100 percent at a global level," said François Carbone, head of the French crowdfunding association.

"This shows that there is strong interest in France for this mode of funding, and that it is rising quickly."

Buzcard is a case in point. The French firm that makes innovative, scannable business cards raised €260,000 in just three days this year after months of unfruitful talks with angel investors, who traditionally provide capital for start-ups.

On the lower end of the spectrum, beekeeper Thomas Cambassedes raised more than €27,000 to buy much-needed hives — over three times his initial target.

The government itself has also jumped onto the bandwagon to help renovate its national monuments at a time of dwindling funds.

The Pantheon, the famed resting place for French national heroes, the Mont-Saint-Michel, the medieval city of Carcassonne… all raised more than they had initially asked for.

But analysts caution that only half of all projects submitted on crowdfunding websites get financed in full.

Scellier and Rabastens, for instance, have so far only raised half of the €10,000 they need to pay back machinery used to make the insect snacks – due to be commercialized from December — although they still have a month left to reach their target.

Oliver Gajda, head of the European Crowdfunding Network, warned that inexperienced investors needed to understand that there were risks involved and that those expecting a return could be disappointed.

"Best practices need to be established," he said, adding that more transparency would be needed on online platforms.