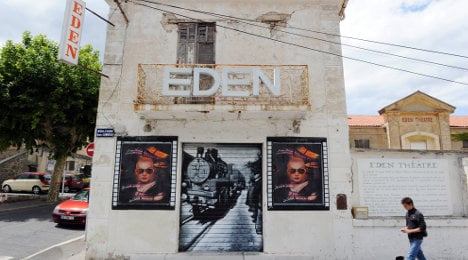 The Eden Cinema in France, where the Lumiere brothers Auguste and Louis, screened their first moving pictures to 250 dazzled spectators on March 21, 1899. Photo: Gerard Julien/AFP

Gleaming, velvet seats replace dusty chairs, fresh yellow paint and mosaic tiles adorn the facade while oak floors take the place of old carpets… The Eden Theatre, which closed in 1995, is all set for an inauguratory gala event.

Actresses Juliette Binoche and Nathalie Baye, and film director Roman Polanski, are reportedly among the stars expected to attend Wednesday's ceremony at the seafront theatre in La Ciotat, a town near the sprawling port
city of Marseille.

It was at Eden that the Lumiere brothers, Auguste and Louis, screened their first moving pictures to 250 dazzled spectators on March 21, 1899.

The theatre was then owned by Raoul Gallaud, a friend of the brothers' father Antoine Lumiere – a rich industrialist.

Over the decades, the Eden became both a cinema and theatre, and several French film stars such as Yves Montand and Fernandel performed there in the early days of their careers.

But it hit bad times in the 1980s when the then owner was killed by crooks trying to steal his money, and movie buffs just stopped going. After that, the building opened only for one week every year to host a festival showcasing the first ever French-language movies, until its closure in 1995.

But supporters of this old, historic monument never gave up their fight to get it reopened, and it was not until Marseille was named European Capital of Culture for 2013 that local authorities finally agreed to renovations that
cost six million euros ($8.1 million).

The Eden will operate as a normal cinema run by a private operator, and visitors will also be able to wander through a permanent exhibition outlining the origins of animated pictures.

Outside, the facade will be adorned with a laser installation at night depicting a train, to mark the 50-second-long film 'A train arriving at La Ciotat station' filmed by the Lumiere brothers in 1895.

The challenge, though, will be to make the 166-seat theatre economically viable, and fans of the theatre believe it should be a larger cultural project that offers educational tours for school children, screens restored films and hosts film festivals.

What type of films the cinema will screen remains to be seen. The reopening of the Eden Theatre comes just a week after a study revealed that the French are turning their backs on 'Made in France' films in favour of Hollywood blockbusters.