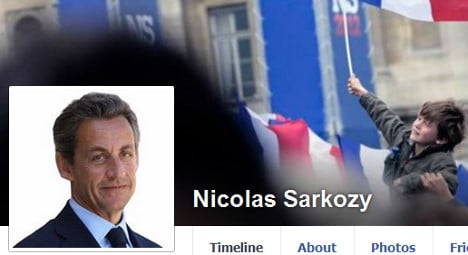 Sarkozy took to Facebook to thank his supporters and lambast his critics. Photo: screengrab Facebook
But in less than 18 months, Sarkozy has enjoyed a phenomenal resurgence, now ranking among the country's most popular politicians and widely touted as the right's best chance for retaking the presidency in 2017.
And while he still faces a slew of other legal probes, the decision by investigating judges to drop illegal campaign financing charges against Sarkozy has swept away a key obstacle to his potential comeback.
The decision will come as a huge relief to Sarkozy and the many supporters who see him as the only candidate capable of defeating the ruling Socialists in the 2017 presidential and parliamentary elections.
Judges have removed the biggest and most immediate obstacle to a career revival for the 58-year-old.
The charismatic right-winger had been facing a lengthy trial process, a potential three-year prison term and a ban from public office after being formally charged in March as part of a wide-ranging probe into allegations he illegally received cash from France's richest woman, Liliane Bettencourt, to help fund his successful 2007 election campaign.
But after six months of deliberations, the judges in charge of the case have decided to send only 10 of the 12 accused for trial and to drop proceedings against Sarkozy and one other suspect, tax lawyer Fabrice Goguel, judicial sources told AFP.
Political author and French TV presenter Jean-Baptiste Marteau told The Local on Tuesday that it will be a long road back for Sarkozy, but he is well on the way.
"He will need to battle to get back to the top and it will be long and hard road. He is not in a rush at the moment but those close to him told me that in Sarkozy's head, the campaign has already begun and he will do everything to get there.
"He will first have to overcome François Fillon, who is his main rival on the right. They have a fierce rivalry. In recent months Sarkozy has had no choice but to let Fillon take the lead role.
"Sarkozy will also have a job to convince the French people that he is not the same person who lost the 2012 election to François Hollande. He will want to show them that he has changed.
"Certainly the main obstacle has been overcome. He will now wait until after the 2014 municipal elections before making a real return to the limelight." (Sarkozy greets supporters at a UMP meeting earlier this year Photo: AFP)
Sarkozy hailed the decision, thanking his supporters and criticising political opponents who had used the case against him.
"The courts have declared me innocent in the Bettencourt case," Sarkozy said in a statement on his Facebook page.
"Given my previous responsibilities, I will not make any comment on the way justice has been done," he said.
"To those politicians who during these long months used this 'scandal' and participated in fostering suspicion, I want to remind them that the presumption of innocence is a fundamental principle," he said.
"Slander gets us nowhere. It does nothing but debase democracy."
Since winning the 2012 election President François Hollande has since suffered a steep drop in public opinion polls – becoming the least-popular president in modern French history – while Sarkozy has enjoyed a surprising resurrection.
Sarkozy has not yet officially announced a return to politics but his right-wing UMP party has struggled to find a replacement who can attract the same fierce loyalty he inspires.
In a poll of public confidence by TNS Sofres last week, Sarkozy came second only to popular Interior Minister Manuel Valls, with 35 percent of respondents choosing the former president as the best person to play an "important role" in running the country.
In the same poll, 74 percent of those surveyed said they had no confidence in Hollande.
Sarkozy's allies were also keen to play up the significance of Monday's unexpected twist in the legal saga.
'France has need of someone who can be a leader'
"It means his political calendar is no longer a hostage to the judicial calendar," said Rachida Dati, the former justice minister who was a Sarkozy protege. "My feeling is France may have need of someone who can unite and who can provide leadership where there is currently none."
The specific charge against Sarkozy was that he took advantage of Bettencourt by seeking and accepting her money when she was too frail to know what she was doing. Bettencourt, now 90, has suffered from dementia since 2006.
Amongst the six who will face trial is Eric Woerth, a former minister who was Sarkozy's campaign treasurer and who stands accused of accepting envelopes stuffed with cash from Bettencourt's right-hand man, Patrice de Maistre.
The decision to drop the charges against Sarkozy is in line with a recommendation from the prosecutor in the case, who had advised the judges that convictions were unlikely to be secured against six of the 12 accused, including the ex-president.
That advice was initially ignored by the judges, prompting allegations of political bias, and it had been widely assumed that Sarkozy would be sent for trial following the failure last week of an attempt by his lawyers to have the charges dismissed on procedural grounds.
Sarkozy's name is also at the centre of probes into whether his 2007 campaign accepted money from former Libyan strongman Moamer Kadhafi and whether his office used public funds to carry out political opinion polls.
But none of these cases had the potential of the Bettencourt probe to do him serious political harm.