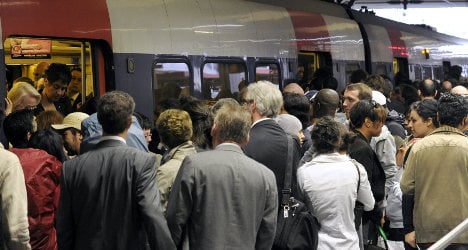 A European wide strike of rail workers is set to hit train services in France from Tuesday at 7pm. File photo: Bertrand Guay/AFP

The French rail network is expected to be hit by localised delays when a Europe-wide strike against European Union rail reforms begins at 7pm on Tuesday.

As part of a day of action the workers’ unions Confédération Générale du Travail (CGT) and Confédération Française Démocratique du Travail (CFDT) are going on strike to protest a series of EU measures aimed pushing through the deregulation of public transport in the European Union from 2019.

CGT members are also using the walk-out, which will last until 8am on Thursday, to protest against proposed reforms within France that would see rail operator SNCF unified with the other public entities that manage the railway infrastructure.

Gilbert Garrel, Secretary General of the CGT Cheminots said: "It is imperative to block the privatisation measures from Brussels which seek to uproot long-standing companies, destroy the idea of national public services and widen the competition."

The last rail transport strike on June 13th involved six unions and 70% of drivers and controllers but this week's strike will be restricted to more localized disturbances on the national rail network.

The following is a breakdown of what to expect from Tuesday 7pm onwards.