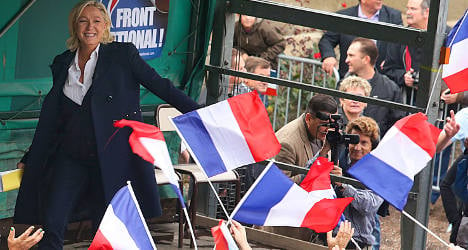 In a result that reflected the extreme right's rising popularity, the representative of the Front National (FN) got 40.4 percent of votes in the first round of Sunday's by-election in the southeastern town of Brignoles while an independent extreme right candidate won 9.1 percent.

The result came in an area where the far right has traditionally done well but it was nevertheless seen as symbolically significant.

For her part, Front National leader Marine Le Pen on Monday declared that Sunday's vote showed the FN is "already the main party in France."

The FN's support has been rising nationwide with recent opinion polls suggesting it could take around 16 percent of votes in municipal elections scheduled for next March.

Analysts say a struggling economy, record unemployment and mounting concern over crime have bolstered support for a party that has traditionally appealed to voters on an anti-immigration, anti-EU platform.

David Assouline, spokesman for the Socialist party, called for the left to unite against the rise of the FN, warning that the by-election result was a "warning shot" ahead of the municipal elections, the first real electoral test since the Socialists came to power last year.

"It proves what we have been saying for months: when the FN stands strong and tall, the left must absolutely be united from the first round," he told Europe 1 radio.

The main right-wing opposition UMP party, which won 20.9 percent of votes in Sunday's by-election, will battle against the FN candidate in the second round on October 13th.

The Socialist party had no candidate in the by-election and had publicly supported the far-left PCF party, which was eliminated in the first round.

Assouline said his party now called on Brignoles residents to vote for the UMP candidate in the second round rather than let the FN in.

'We are absolutely not a party of the right'

FN leader Marine Le Pen has attempted to broaden the appeal of a party whose image has long been linked to the personality of her father Jean-Marie, target of a string of convictions for incitement to racial hatred and holocaust denial.

Under her leadership, the FN has expelled overtly racist activists and selected a number of ethnic minority candidates for local elections, as well as increasing its focus on policy issues other than immigration and the EU.

Indeed, just last week Le Pen the younger attempted to distance her party from "extremist" political groups elsewhere in Europe, such as Golden Dawn in Greece, threatening to sue anyone who used that label to describe the FN.

"We are absolutely not a party of the right, those who think that are making a total analytical error," Le Pen said last Thursday.

"I'm considering seeking a judicial ruling that the description 'extreme right' is a pejorative term deliberately used to damage the Front National.

'Journalists are entitled to write what they want'

For his part, Jean-Yves Camus, a specialist on the far right from IRIS (Institute de Relations Internationales et Stratigeques) told The Local Le Pen was making a big mistake but she may have a point.

“The National Front is not like Golden Dawn in Greece, which is just a bunch of thugs. Nor is it like the BNP in Britain, which is certainly extreme right," he said.

“She’s making a big mistake, though. Journalists and writers are entitled to write what they want without being subject to harassment. She has complained many times about all the legal cases against the Front National but she is going down the same route herself."

In July, the European Parliament paved the way for former MEP Le Pen to be prosecuted in France for incitement to racial hatred over comments she made in 2010, where she compared Muslim street prayers to the Nazi occupation.

Two weeks later, a Roma rights group claimed they had launched similar legal proceedings against her father Jean-Marie for labelling the Roma community "smelly" and "rash-inducing" in a speech in the southern city of Nice on July 4th.