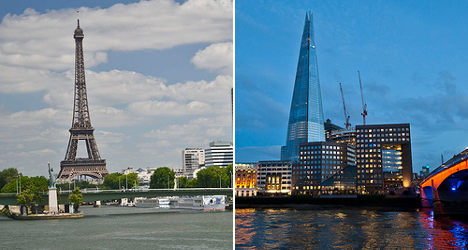 Paris and the Eiffel Tower have been toppled by London and The Shard in the "World's Best City" index. Photos: Awsheffield/Flickr and Tom Godber

Is it the pickpockets, the long queues for attractions, the moody waiters or perhaps just the increasing cost of a cold beer?

While the reasons may not exactly be clear, the result is pretty conclusive – Paris is no longer the “best city in the world”.

Or at least that’s according to the latest edition of a biennial survey by Anholt-GFK City Brands Index.

The ranking, released this week, showed that while Paris may still be the most visited city in the world, it is no longer the "best" after the French capital was knocked off the top spot.

Its crown was taken by none other than its cross-Channel rival London. Australia’s Sydney came in second place, pushing Paris down to bronze position.

The City of Light did, however, end up ahead of North American cities such as New York, L.A. and Toronto.

However some people were aghast atthe result of the survey, including our readers, who have helped us put together a list of reasons why Paris beats London hands down. See below.

Ten reasons why Paris is better than London

The poll, which measures a city’s brand image, power and appeal, is based on the opinions of visitors to the city.

The City Brand’s Index measures the importance of a city’s reputation in six dimensions: international status and standing; esthetic; pre-requisites (affordable accommodation and standard of public amenities); people; pulse (interesting things to do) and its economic and educational potential.

For his part, François Navarro from the regional tourism committee CRT was defiant in response to the survey.

"One of the main advantages Paris has over London is the food. That's not to say London doesn't also have some good restaurants, but that's because there are French chefs working in them," said Navarro.

"Another major advantage is the shopping. London might have Harrod's, but it doesn't compare with the Galeries Lafayette [department store]. London is for sales, Paris is for shopping. There's a big difference between the two," he added.

Those behind the poll were not surprised by the result and say it should send a warning to Paris city chiefs.

“While Paris still takes top place for the individual Pulse measure, its overall Index ranking has been dragged down by its 13th and 14th places for the People and Pre-requisites measures,” said Simon Anholt, independent policy advisor on national identity and reputation at Anholt.

“Even more worrying for Paris, its Potential Index score has experienced a large decline between 2011 and 2013, which should be a warning sign to all stakeholders of the city.”

Xiaoyan Zhao Senior Vice President and Director at GfK, suggests the fall in Paris’s status could be down to the harsh economic climate.

“Looking further into the momentum of the 50 cities, Paris has shown one of the three largest declines on the Potential Index, together with two other capital cities mired in economic crisis – Madrid and Tokyo.”

Speculation as to why London has jumped ahead of Paris is obviously rife, but most suggest the British capital is still riding on the wave of the 2012 Olympic Games and recent celebrations such as the birth of the new royal baby.

The fact the Olympics helped London hit top spot will be an added source of frustration in Paris as the French capital had been favourite to host the Games before being pipped to the post by London.

And there could be more reason to be bitter on Monday when the hosts for the 2018 Gay Games will be announced in Cleveland USA. Paris once again is the stand-out favourite, but London is also in the running.

The results of this week's "World's Best City" poll may disappoint authorities in Paris, but perhaps they will not be surprised. Earlier this year they produced a training manual aimed at teaching those who work in the tourist industry how to better welcome visitors. The aim of the campaign is to focus on the quality of welcome that visitors receive in Paris, and to train professionals here to understand the differences between them,” tourist chief François Navarro told The Local at the time.

Navarro claimed that despite the high volume of visitors to Paris, and despite their satisfaction, "our goal is to improve their experience even more.”

Part of that, he says, is teaching restaurant-owners, museum staff, and shopkeepers to understand the important cultural differences between various nationalities.

The Anholt-GFK City Brands Index was the result of more than 5,140 interviews conducted in Australia, Brazil, China, France, Germany, India, Russia, South Korea, the US and the UK.

Do you agree with the poll? Paris or London? Let us know your views in the comments section below or email us at [email protected] and we will publish a selection of the best responses.