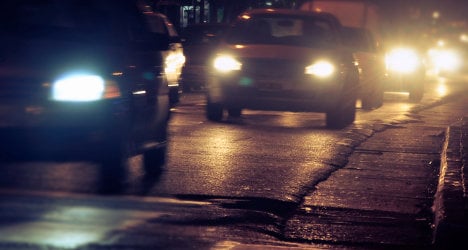 “There's no correlation between speed limits and road deaths. Look at the British – they have the best figures in Europe for fatalities, and drive much faster than the French." Photo: Ramiro Ramirez

The group was responding to a report, leaked over the weekend, which called for limits to be lowered from 90 to 80 km/h.

The CNSR (National Road Safety Council) report, leaked to AFP on Saturday, claims that lowering the limit on two-way roads would save 450 lives every year, and 200 if it was only implemented in dangerous areas.

The recommendations appear likely to be adopted by the French government, according to statements made by Interior Minister Manuel Valls, during the summer.

“I remain convinced that it’s by further lowering the speed limit, particularly on secondary roads, that we’ll achieve a drop in road deaths,” Valls said after the CNSR’s most recent meeting in June.

“And if I had to take measures of that kind in the morning, I wouldn’t hesitate to do so,” he added.

The change in the law won’t be that straightforward, however, if 40 Million Motorists have any say in the matter.

'The British drive faster than the French and have less accidents'

In response to the leaked report, the group on Sunday launched an online petition “No to lowering speed limits,” which invites signers to declare: “I am a reasonable, responsible driver and I say ‘No’ to more restrictions, and ‘No’ to decisions made arbitrarily by the government.’”

Pierre Chasseray, head of 40 Million Motorists, told The Local on Monday that there was no logic to lowering the speed limit.

“There is no correlation between speed limits and road deaths. Look at the British – they have the best figures in Europe for fatalities, and they drive much faster than the French.”

“Why? Because they figured out a long time ago that drink-driving is the real cause of road deaths, and they brought in severe penalties for such behaviour, while leaving speed limits alone,” he said.

The group accuses Valls of bowing to pressure from the “anti-car lobby,” and says the CNSR report uses “outmoded mathematical formulas” to come up with the claim that lowering the speed limit by 10 km/h would save 450 lives each year.

In an open letter to the minister, the organization notes a “natural drop in road deaths” due to the evolution of vehicle safety features, and an improvement of infrastructure on French roads.

Elsewhere on the website, the group pins the primary blame for road deaths on drink-driving, falling asleep at the wheel, and dangerous objects on smaller departmental roads.

"We have to improve infrastructure on our roads, not punish and mistrust French drivers, like the government is doing,” he added, noting that the petition had gained 47,000 signatures in less that 24 hours.

In July, Valls set France the target of cutting road deaths to below 2,000 annually by the year 2020.

The proposal was part of a raft of measures including reducing the waiting time for obtaining a driver’s license, banning ‘hands-free’ telephone kits, and expanding the number of number  of speed radars by 100 to 4,200 by the end of 2013.