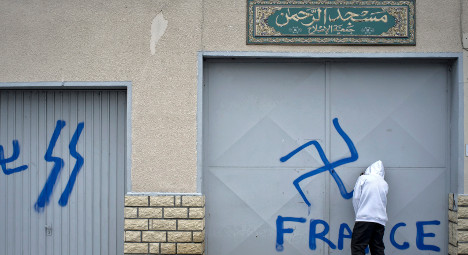 After last month's divisive rows over the Roma community and reports of an increase in anti-Semitic and Islamophobic incidents in recent months, the results of a poll released on Monday might not be a surprise to many people.

According to a survey carried out by polling agency OpinionWay, a majority of French people (59 percent) believe that racism has increased in their country.

“I am not surprised by the results of this survey,” Louis-Georges Tin, president of the Representative Council for Black Associations (CRAN) told The Local on Monday. Tin blamed President François Hollande and the current Socialist government for breaking promises and failing to soften the political discourse.

“The former President Nicolas Sarkozy did many things to encourage racism in this country and the current President François Hollande has done nothing against it. The same political discourse around Muslims and Roma just continues.

“It’s obviously a European phenomenon, but what is terrible in France is that we had a conservative government and now we have a socialist government, who are supposed to be promoting anti-racism policies, but in fact things are getting worse. There’s no hope for us. This is why we are desperate." Tin laid particular blame for the continuation of xenophobic rhetoric under the Socialist government at the feet of Interior Minister Manuel Valls.

Valls has come under fire recently for his remarks about the Roma community, whom he accused of not wanting to integrate.

“Hollande says nothing against Valls. When he was running to be president Hollande said he would introduce a policy to end ethnic profiling, but Manuel Valls has gone against that. We are left wondering who is the real president here?

Tin said black and Arab voters, who had backed Hollande in last year’s election are disillusioned. “They may not vote for him again,” he said.

Tin stresses, however, that France is no different to the rest of Europe and in comparison to some countries it's much better.

“We are very aware of the situation in Greece, in Hungary and in Italy. It is certainly not as bad in France as it is in those countries. But what is shocking in France is that we have this attitude that we are the country of human rights and we give lessons to everyone else."

Alain Jakubowicz, president of the anti-racism organisation LICRA, which commissioned the OpinionWay poll said: “Our citizens are lucid. Yes, racist and anti-Semitic acts have increased in our country, particularly in the last three years. This is also the case throughout the whole of Europe.

“The economic, moral and social crisis that we all know as been accompanied by an increase in xenophobia and assertion of identity,” Jakubowicz told Le Parisien newspaper.

If LICRA’s survey suggested the French believe their country is now more racist, it also revealed the population believes anti-racist groups like LICRA are doing little in the fight against it, with 70 percent considerng their work “ineffective”.

“Our citizens have given us a big kick up the backside,” said LICRA’s Jakubowicz. “In the 80s we were the kings at the dinner table but now people view us as draconian organisations disconnected from reality that suck money out of society.”

The poll also revealed French people believed groups like LICRA should be fighting against racism on the battleground of schools, businesses, sports clubs and in the media.