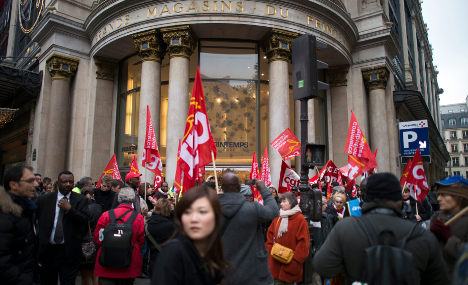 The issue came to a head in recent weeks with a series of court rulings upholding bans on late night and Sunday openings for non-food retailers.

These have infuriated those workers who want the Sunday hours and drawn criticism that the laws are archaic and ill-suited to a time of economic hardship.

The controversy comes at a time when the eurozone's second economy is grappling with record unemployment of more than three million and growth has stagnated.

France's Socialist government, which has promised to balance austerity with growth, has so far backed the legislation in its current form.

"There is no question of touching the principle of a Sunday rest," Labour Minister Michel Sapin said.

However, the government has appointed the former head of the country's postal services Jean-Paul Bailly to look into the weaknesses of the present legislation and present proposals by the end of November.

"I am ashamed. I find it scandalous that in this country we do not give people the right to work. And then we are surprised that there is unemployment," said Elisabeth Armani, a Paris resident who shops on Sundays. Paris missing out on 'economic manna' of Sunday shopping

Nathalie Kosciusko-Morizet, the candidate for Paris mayor from the centre-right opposition UMP party, warned the measures were causing huge losses in one of the world's most-visited cities.

"The employees want to work and businesses make at least 20 percent of their weekly turnover on this day," she said in an interview to Metro News, a freesheet.

"We have to keep this economic manna in the capital," she said. "Take into account the fact that tour operators are organising an exodus of tourists (from Paris) to London on Sunday so that they can do their shopping.

Some shops have received special permission from sympathetic local authorities to open on Sunday, but several home improvement stores just went ahead and opened anyway.

A survey on Thursday showed that 66 percent of 933 people polled by Tilder-LCI-Opinionway on October 2 and 3 approved of their defiance.

Just before that cosmetics and perfume maker Sephora was ordered to close its flagship Champs-Elysees store at 9:00 pm in line with another law banning late-night work.

Under French law, companies can ask employees to work between 9:00 pm and 6:00 am but such shifts have to be "exceptional" rather than the rule and meet a tightly defined set of criteria.

Retailers meanwhile can only open on a Sunday under very specific conditions — if they are located in a tourist or a high-density area. Any shop selling food, such as a butcher, can operate until 1 pm.

Sunday trade and even all-night businesses are fairly common in a number of countries, including China and the United States. Many European countries such as Spain, Portugal and Italy have eased legislation in the wake of the eurozone crisis. About 30 percent of French workers work occasionally or regularly on Sundays. The law stipulates that this has to be on a voluntary basis and they earn 50 percent more for Sunday work.

The roots of the law in France — which is officially secular but deeply Catholic — lie in sweeping demonstrations staged by workers in major cities between 1898 and 1906 which resulted in a law declaring Sunday as the mandatory day of rest, said Robert Beck, the author of a book on the history of Sunday's place in modern French culture.

"In this debate, today like back then, the Church and the trade unions are opposed, while the entrepreneurs are for" working on Sunday, Beck told AFP.

The principle is made even more significant by the fact that the Sunday family lunch is still sacrosanct for many French households.

Yet the effect of Sunday shopping on growth is difficult to quantify, he noted.

Students financing their education are clearly interested in the better-paid weekend hours, but Naudet said he was personally against the measure, stressing that the well-being of children and a balanced family life were far more important.

"That was also the view in the greatest civilisations that there must be one day in the week when trade does not take first place," said centrist Francois Bayrou, the president of the MoDem party.

Jean-Luc Melenchon, the figurehead of the far-left, added: "The weekly holiday, the fact that one can at least unite the family on one day of the week, is very important."