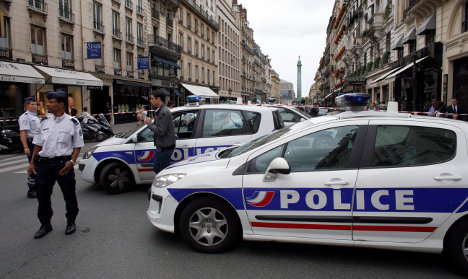 Fifteen robbers, some of them wielding axes and sledgehammers, attacked the Vacheron Constantin store near the high-end Place Vendome in broad daylight on Friday and made off with a haul worth hundreds of thousands of euros.

Two men aged 17 and 24, one from Moldova and one from Romania, were arrested shortly afterwards and remain in custody.

Investigators are trying to establish whether the three men arrested on Saturday were directly involved in the theft, or had links with the culprits.

They were not carrying identity papers, but were from Eastern Europe, said the source, adding that French investigators were working "in cooperation with Romanian police".

Police said Friday the goods stolen were "of a very significant amount." A single watch crafted by the Swiss luxury watch maker Vacheron Constantin can sell for hundreds of thousands of euros.

France has been hit by a series of high-profile jewellery heists this year, including several in the posh Riviera resort town of Cannes.

In a spectacular robbery, jewel thieves made off with baubles worth $1.4 million due to be loaned to movie stars at the Cannes film festival in May.

Another theft during the festival saw robbers make off with a diamond necklace with an estimated value of $1.9 million.

And early last month, four men rammed their car into a jewellery store near Place Vendome, making off with a two-million-euro ($2.6-million) booty.