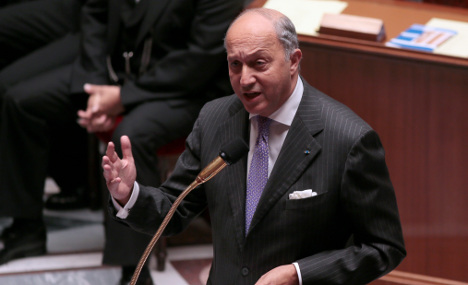 French Foreign Minister Laurent Fabius said he was renewing the campaign because of the council's two year deadlock over the Syria war — during which Russia has vetoed three resolutions.

Fabius did not name Russia in a commentary published by the New York Times, Le Monde and other newspapers, but said "the council was powerless in the face of the Syrian tragedy."

"For all those who expect the United Nations to shoulder its responsibilities in order to protect populations, this situation is reprehensible," he added.

A resolution passed on September 27 ordering the destruction of Syria's chemical weapons was the council's first on the conflict, which the UN says has left well over 100,000 dead.

The minister said France proposes that  "if the Security Council were required to make a decision with regard to a mass crime, the permanent members would agree to suspend their right to veto."

Britain, China, France, Russia and the United States — the permanent UN Security Council members since its creation in 1946 — can each veto any resolution passed by the 15-member body.

Traditionally, each has used the veto when strategic interests are seen as at stake.

Since 2000, the United States has used the veto 11 times, mainly to stop resolutions attacking its ally Israel.

France and Britain have not used their veto since 1989.

Fabius said the permanent five should agree to "voluntarily regulate their right to exercise their veto" when a population faces a large-scale threat.

He said no change to the UN Charter would be necessary.

France proposed that if 50 countries made a request, the UN secretary general would determine whether a "mass crime" had been committed and the voluntary accord could come into effect.

Fabius said the move would allow the council to preserve its "fundamental credibility."

But he added that "to be realistically applicable, this code would exclude cases where the vital national interests of a permanent member of the council were at stake."