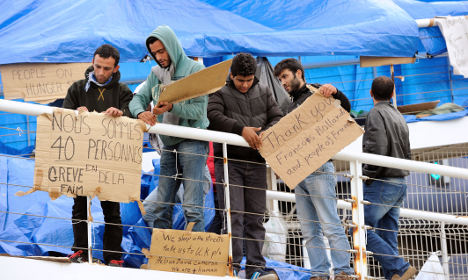 They backed down after talks with British border police who ruled out group entry for the Syrians.

The group dispersed with the vast majority gathering their belongings and heading back into the centre of Calais.

Eight of the group, five adults and three children, took a bus to the town of Arras to seek shelter there.

Earlier in the day, the three-member team of the Border Force held talks with the refugees.

British officials said they could only examine on a case-by-case basis the requests of those who already had family in Britain, according to Denis Robin, the top government official for France's northern Pas-de-Calais region.

The negotiations included two representatives from the refugees, who had blockaded the terminal since Wednesday.

Robin said the British officials indicated that the entry of the entire group "without any checks or examinations of the different cases" was out of the question.

"However, the representatives of the Border Force said that they are open to examining on a case-by-case basis if there are Syrian nationals with family on British territory."

His statements sent a wave of gloom among the refugees. Two men joined two others already perched on a port building and threatened to jump but all four later came down.

The talks also drew in representatives from the Medecins du Monde and Secours Catholique charities.

Mariam Guerey, of Secours Catholique, said the Syrians were "shocked" by the British refusal to take them in.

"They had another image of England. For them, this is the dream," she said.

The mayor of Calais, a Channel port from where many ships and ferries leave for Britain, said the protest highlighted the need for a concerted European strategy.

"It's unacceptable that it is in France and at Calais that one has to control immigration."

The protest, which has seen 20 people go on hunger strike, prompted French authorities to offer to legalise the refugees' status.

Some 50 police from an anti-riot squad moved in early Friday to try and clear the protestors from a footbridge but backed off when two of them threatened suicide.

Pas-de-Calais prefect Robin then went to the site and offered the Syrians, currently illegal immigrants, the right to asylum.

"Today, the Syrians present here are caught in a stalemate. What we can do is to offer them a status on French territory… in other words to make a request for asylum," he told reporters.

He said every asylum demand had a "95 percent chance of success". French Foreign Minister Laurent Fabius has pledged to fast-track the applications of Syrians fleeing their war-torn country.

But some refugees said they would still try to get into the UK.

The protesting refugees, most of whom arrived in Calais a month ago, have voiced disappointment at the way they have been treated in France.

They affixed cardboard signs reading "Take us to the UK", and "We want to talk to David Cameron".

"We live outside like dogs, hunted down by the police, we see we are not welcome, how can we seek asylum here?" said 19-year-old Tarik.

Ali, a 38-year-old, said although French President Francois Hollande had taken a strong stand against the regime of President Bashar al-Assad for using chemical weapons, the French were not welcoming at all.