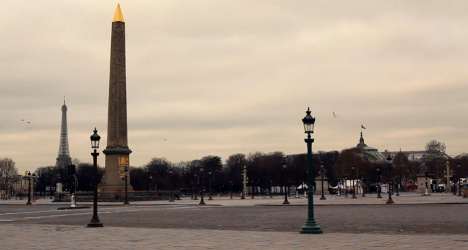 Place de la Concorde in Paris, with the Eiffel Tower in the background. What's wrong with this picture? Photo: Menilmonde/Vimeo

Can you imagine Paris, the world's most visited city, without any visitors? The buildings are still in place, the Eiffel Tower still stretches above the City of Light, but there are no queues.

The boulangeries and brasseries are still on every corner, but completely empty. The périphérique still winds its way in and out of the urban limits, but there's no insane traffic, and no motorists being driven mad.

All that's left, after an apocalyptic scenario, is the architecture and history, and the pigeons.

With some technological trickery and a lot of patience, Claire and Maxime, two French film-makers, have managed to bring that imaginary scene to life in a short movie entitled 'Hypocentre.'

"What if Paris was emptied of its inhabitants, and the actions of Man more and more harmful to our fragile planet?" the pair begin in their explanation of the video.

"Isn't it the dream of everyone else in France to see Paris with the Parisians cleared out?"

With 'Hypocentre,' the film-makers make that dream come true, and with breathtaking results. Before and After: The Champs Elysées from the Arc de Triomphe. Photo: Menilmonde/Screengrab

Claire and Maxime dismiss the necessity for fancy, expensive camera equipment, or – even worse – waking up at 6am to try to snatch a few shots of barren Paris streets.

Instead, according to them, "you just have to have a good tripod and a good video camera."

"Then, you shoot a scene for about three to five minutes," they add. Pointing out that a film clip is actually composed of about 25 images per second, the pair explain that they exported their clips as photos, using video editing software.

Out of 7,500 images for each five-minute segment, there will inevitably be some images where patches of road or pavement are "naked."

All that then remains is the painstaking process of replacing, frame-by-frame, the occupied patches with the naked ones.

And what you get is this eerie but beautiful four and a half minutes of film.