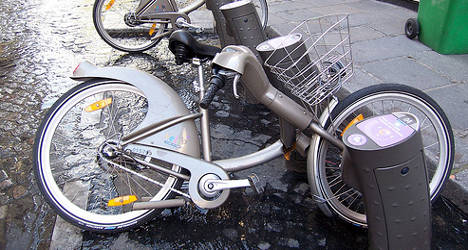 A Velib' in Paris that has fallen victim to wanton vandals. Photo: Luc Legay

"The vandalism is at its highest level since July 2007, when the Velib' bike-sharing scheme was rolled out,” Albert Asseraf, from JCDecaux, the multi-national firm that runs Velib, tells The Local.

Although vandalism and theft has put a spoke in the wheels of Velib' ever since it was launched, it seems to have got out of control in recent months.

“We are six years down the line and it has never been this bad,” Asseraf laments. “It has become a real problem. We have 220 bike mechanics working every day to repair the thousands of velibs that have been vandalised.”

A mangled Velib' bicycle dumped on a Paris street corner has now become a common sight, especially in the north-east of the capital in the 19th and 20th arrondissements, where the problem is rife.

JCDecaux has been forced to close down many docking stations in these areas to cut down on vandalism and theft, which leaves many honest Velib' users unable to make use of the system.

Theft and vandalism is hitting authorities hard in the pocket.

“Each Velib' costs us €630 and we buy the parts from all over the world. The thefts and vandalism are becoming a real financial problem. The costs are exorbitant. We simply cannot replace every Velib'. This is why we need a solution,” Asseraf said.

For him the solution that needs to be explored is installing CCTV near docking stations in areas where the bikes are regularly vandalised or stolen.

“This is obviously a discussion for the politicians to have, but for us, it could be a solution. The cameras would not just help catch the vandals but also act as a deterrent.

“It could solve the problem at the Velib' stations worst affected,” Asseraf added.

However, he admits that cameras will only do so much.

“If someone is really intent on robbing or vandalising a bike then nothing is going to stop them. We have to change people’s mentality,” he said.

Currently anyone caught vandalising a Velib' is hauled in and forced to undergo a course where they are taught how to repair the bikes. The programme is aimed at trying to show them the “consequences of their actions.”

The Paris Town Hall (Mairie), which is ultimately responsible for the Velib' system insisted measures were being taken to stem the tide of bike crime.

In a statement to The Local, the Mairie listed a series of moves that are in place including using existing street CCTV to monitor docking stations.

A working group has been set up to consult with law enforcement in the capital to strengthen police action around the worst affected stations.

Awareness workshops will take place in schools and colleges and Velib' has also improved its information system to advise users when docking stations are closed. One visit to the website gives an example of just how bad the problem has become.

The Town Hall also insists there are 18,000 bikes in circulation in 2013. That's 3,000 more than the number required under the contract with JCDecaux to allow the scheme to function properly.

But authorities and JCDecaux are determined to the keep the scheme rolling smoothly despite the efforts of thieves and vandals to puncture it.

“The Velib' system must be protected. It’s very well used by Parisians and every month we break new records for the number of journeys made,” Asseraf said.