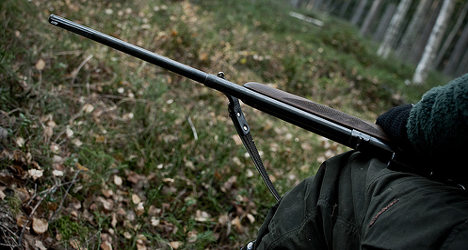 French hunting controversy goes on after 61-year-old shoots dead his own son, mistaking him for a wild boar. Photo: TEKN Photography

France witnessed two more fatal hunting accidents this week that will no doubt lead to renewed calls for more stringent safety measures to be introduced during the hunting season.

On Thursday a 61-year-old hunter accidentally killed his own son during a hunting party in the Ardèche region, after mistaking him for a wild boar, according to reports in Ouest France newspaper.

Initial reports say the man opened fire after seeing a shadow pass by. Tragically, the shadow was not the wild boar he thought he had aimed at, but was in fact his own son.

Efforts were made to resuscitate the man but he died at the scene. The father, overcome with shock and grief, collapsed and had to be admitted to hospital, Ouest France reports.

The fatal accident came in the same week that a six-year-old boy died in the north of France, days after being shot during a hunt.

The boy was shot in the groin, near the village of Saveuse, west of Amiens in the Somme region last Sunday, but succumbed to his injuries on Wednesday, according to TF1 TV.

If reports of the initial findings of the investigation are to be believed, the fatal accident appears to be a tragic freak of nature.

Initial reports say the hunter left his gun on the floor in order to relieve himself, taking care to remove the cartridges. A second person then passed, replaced the cartridges back in the gun and then left the weapon lying “on a fence or on a tree”.

A dog then knocked the weapon and it fired, hitting the boy who was standing nearby. The hunter and his 16-year-old son, who is believed to have been the one to have reloaded the gun, were both arrested by police on suspicion of manslaughter.

This week’s fatalities come after an 82-year-old deaf hunter left two mushroom pickers seriously injured, one of them critically, after mistaking them for a pheasant.

A court in Perigueux, in the south west of France banned the 82-year-old from hunting and owning a gun for five years and cancelled his hunting license. His rifle was also confiscated.

The Association for the Protection of Wild Animals (ASPAS) which is campaigning against a ban on hunting on Sundays and for more safety measures to be introduced, denounced the “tragedies that can be added to the list of accidents that is already too long”.

Speaking to The Local earlier this month, Pierre Athanaze, the head of ASPAS, said the laws needed to be changed in France to prevent more deaths.

“Hunting needs to be stopped on Sundays, because this is the most dangerous day. There are more and more people heading out into the countryside on a Sunday, whether it's walking, mountain biking or collecting mushrooms. We want an end to it,” he said.

Athanaze also pointed to the fact that many people who go hunting in France these days are elderly and are “not subject to any medical checks” to ensure they have their wits about them and are capable of spotting the difference between a pheasant and two mushroom collectors.