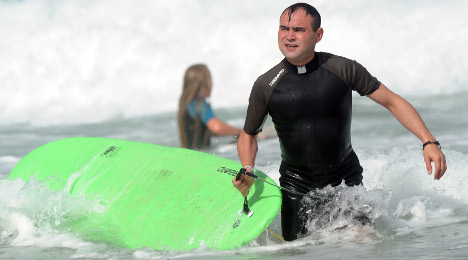 France's "white wolf" pulls his surf board out of the Atlantic Ocean. Photo: Gaizka Iroz/AFP

His surf buddies call him the white wolf. To everyone else he is just R.S.

Welcome to the unlikely world of Rene-Sebastien Fournie, a French priest who persuades young wave worshippers to consider committing themselves to a higher power: God.

With the blessing of the Bishop of Bayonne, R.S. has been a regular feature on the Atlantic beaches of the southwestern corner of France for the last two years.

His business card describes him as a "worthless servant of Christ." And when he swaps his cassock for a wetsuit, he also pops on a dog collar to ensure fellow surfers know there is a purpose behind his presence.

The trim 39-year-old, who is also an accomplished fencer, made it his mission to connect with local youth after returning from six years of study in Rome.

"We're used to seeing him turn up on the beach in his robes," said Enguerrand De Riberolles, 20. "Everyone is intrigued by him.

"I've heard people ask him if he is in disguise — he always replies, 'I'm both priest and surfer'. He's a simple guy and he talks to everyone, so it goes down well."

R.S. himself confirms his integration into the often hedonistic surf set. "If there is a barbecue on the beach in the evening, I get invited out of curiosity," he says.

The priest took up surfing because he had noticed that local youths were only to be found in bars of an evening, preferring to spend their days on the beach.

His bishop has also instructed him to engage with youngsters during the Fetes de Bayonne, an annual five-day festival in August that is synonymous with debauchery.

"The return on the investment on that score has been modest," he notes wryly. "But I have had a few pleasant surprises. It is not unknown for me to hear a confession from someone in the middle of a street at midnight, or to see young surfers or partygoers come and pray at the cathedral.

"I spread the good word, it works and brings them back. It's not in vain."