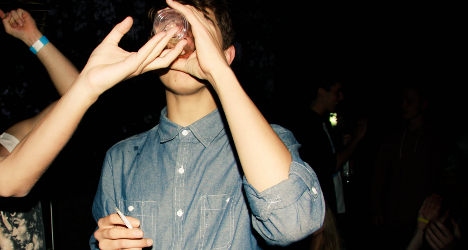 French 16 and 17-year-olds are actually smoking and drinking more since France’s 2009 ban on selling cigarettes and alcohol to teenagers under the age of 18. Photo: Winnie Liu

Despite a 2009 law raising the minimum age of the ban on alcohol and cigarette sales from 16 to 18, teenagers, or more specifically 16 and 17-year-olds are actually drinking and smoking more than they did before the law change, according OFDT, the French Observatory on Drugs and Addiction.

In the latest issue of their monthly journal ‘Tendances’, the Observatory points out that drinking and smoking has increased among French 16 and 17-year-olds, since it became illegal to sell booze and fags to them in 2009.

Between 2007 and 2011 (two years before and two years after the ban), there were modest increases in regular drinking (“usage regulier”), drunkenness (“ivresse”), binge drinking (“alcoolisation ponctuelle importante”) and daily smoking (“usage quotidian”) among 16-year-olds.

That rise in consumption was even more pronounced for 17-year-olds in the period between 2008 and 2011, as this table from the OFDT study indicates. France raised the age limit in 2009 in a bid to tackle the increased trend of "le binge drinking", which up until a few years ago had been a phenomenon associated only with Anglo countries.

Doubts were raised at the time that the law change would not have the desired affect.

"I think that [the health minister] has put a finger in a grenade for which youths will pay dearly: she has created prohibition in France," said Bernard Quartier, president of the National Federation of cafes, brasseries and discotheques. "The street is going to become the premier bistro of France," he said

And this week's report by the OFTD appears to have proved Quartier was right to have concerns.

One third of vendors 'never ask for ID'

The Drugs and Addiction Observatory is in no doubt about what’s to blame for the ineffectiveness of the law.

Not enough tobacco and alcohol sellers are asking for IDs in France, according to the OFDT, and secret checks on vendors aren’t frequent enough.

The study found that only 40 percent of cigarette-vendors, “systematically refused to sell cigarettes to minors,” and the proportion who regularly asked customers for ID hadn’t gone up between 2006 and 2011, despite being mandated by law in 2009.

When it comes to alcohol, only 60 percent of vendors “systematically refused to sell to minors,” and one third said they never asked for ID.

The Observatory recommends “better training [for vendors ] on how to refuse to sell to minors,” and calls for a reinforcement of checks by authorities on vendors, which “at the moment are not numerous enough, and too infrequent to be a deterrent.”

'Getting plastered has become a badge of honour'

The OFTD's report is just the latest in recent months that points to a wave of worrying reports on alcoholism and excessive drinking, particularly among teenagers, in recent months.

Those revelations came just two weeks after a report which found that 134 people died in France every day, from alcohol-related illnesses and incidents.

Tobacco-sellers subjected to checks 'once a century'

France has struggled in recent years to shake its well-known smoking culture, and last December a damning report found that the country’s efforts to cut down had been a complete failure.

The number of smokers fell from 34.7 percent to 31.4 percent between 2000 and 2005 but rose again to 33.7 percent by 2010, with the upward trend strongest among women, the young and people in economic difficulty.

At the time, Didier Migaud, the first president of the Cour de Comptes, the body that audits government spending, compared the situation in France unfavourably to Britain.

There, the percentage of people smoking has fallen from 30 percent to 20 percent in the last decade, thanks to education, programmes designed to help people quit and strict enforcement of restrictions on sales of tobacco, notably to minors.

"Here a tobacconist is likely to be subjected to checks once a century," Migaud said of France.