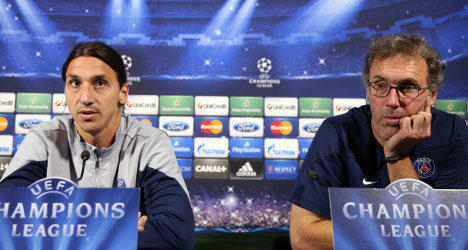 Zlatan Ibrahimovic believes that Paris Saint-Germain are better placed to win the Champions League under Laurent Blanc than they were under his predecessor Carlo Ancelotti.

The Swedish striker was speaking on Tuesday on the eve of PSG's Group C encounter with Benfica at the Parc des Princes, in which he will wear the captain's armband in the absence of injured skipper Thiago Silva.

The French champions are unbeaten in all competitions under Blanc, but while their domestic form has not always been convincing, they romped to a 4-1 win away to Olympiakos in Greece in their opening group match a fortnight ago.

That win showcased Blanc's preferred 4-3-3 formation which brings the best out of the midfield trio of Marco Verratti, Thiago Motta and Blaise Matuidi and allows Ibrahimovic, Ezequiel Lavezzi and record summer signing Edinson Cavani to play together in attack.

"He has given the team a lot of confidence and freedom for us to express ourselves," Ibrahimovic said when asked about the impact made by Blanc since he replaced Real Madrid-bound Ancelotti in June.

"We are playing a little differently, with three midfielders. With our squad he needs to try to keep everyone happy and that is his hardest job. When you are not on the pitch you are not happy. The coach knows what he is doing and he has a winner's mentality."

The former AC Milan and Barcelona striker, who turns 32 on Thursday, helped PSG reach the quarter-finals of last season's competition but believes they are equipped to do better this time around.

"There is a big difference compared to last year. This year, other teams know who PSG are. There is more respect for us. They know we are a contender to win the Champions League.

"The team is a year older and knows each other better and that makes a big difference.

"I have a lot of dreams and winning the Champions League would be more than perfect. We have a great chance with PSG.

"We have a fantastic team, a new coach, everything is there to win. But sometimes you need luck and there are little things that can make the difference. I signed a new contract and I hope to win this trophy with PSG," added last season's Ligue 1 player of the year, who last week extended his deal until 2016.

Meanwhile, Blanc confirmed that Javier Pastore would miss out due to injury against a Benfica side that won their opening group game 2-0 against Anderlecht.

However, he said that Alex had recovered from a thigh problem and would partner fellow Brazilian Marquinhos in central defence.

Borussia Dortmund, beat Marseille 3-0 and will provide a stern test for Wenger's men in the upcoming double header.

Polish striker Robert Lewandowski gave them an early lead, finishing off a brilliant move by the German league leaders.

Marseille goalkeeper Steve Mandanda was badly at fault for Dortmund's second in the second-half as apparently transfixed by the players rising in front of him, he allowed Marco Reus's long range freekick to beat him and cross the line.

Lewandowski, who is widely expected to sign for Dortmund's bitter domestic rivals Bayern Munich for next season, got a second as he slotted home a penalty with 10 minutes remaining.

Dortmund counterpart Jurgen Klopp had to watch his side win from the stands because of a UEFA ban, but he was delighted with what he saw.

"It was a great game, Marseille are a strong team and you have to give it everything you have against them.

"My team were prepared to stick their foot in the door and make sure of the win."