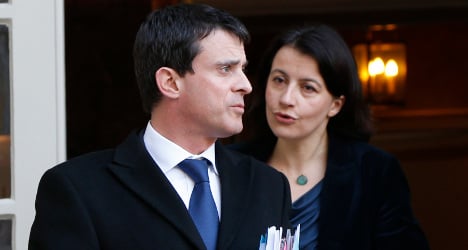 Emerging from a cabinet meeting overshadowed by the row, junior agriculture minister Guillaume Garot said Hollande had issued a reminder of "the rules of unity and solidarity at the heart of government."

Government spokeswoman Najat Vallaud-Belkacem said Hollande had demanded a line be drawn under the Roma row and, in comments that sounded like a public rebuke, urged Prime Minister Jean-Marc Ayrault to "ensure greater coordination of the work and presentation of the government."

Opposition MPs, delighted by the public display of divisions, taunted Hollande with a claim that his government was tilting about like a "drunken boat."

Hollande's long-awaited intervention in the debate failed to prevent a new war of words erupting over whether Interior Minister Manuel Valls had backtracked on his call for most Roma to be kicked out of France.

Government sources anonymously briefed journalists that Valls had acknowledged using "a clumsy turn of phrase" when speaking out over the issue and claimed he had apologised for the subsequent controversy.

But that version of events was immediately disputed by the Valls camp, which denied there had been any apology over the substance of his remarks and claimed the minister had only expressed regret over the tone of the debate and the attacks he had suffered.

The re-eruption of hostilities within the cabinet will inevitably lead to fresh questions over the leadership of Hollande, who has been flayed by even friendly media for failing to assert his authority over the cabinet.

In a series of media interviews over the last week, Valls has claimed that the vast majority of an estimated 20,000 Roma migrants from Bulgaria and Romania had no interest in assimilating into French society, and that they should be "delivered back to the border."

The comments won the backing of three in four voters, polls suggested, helping to consolidate Valls's status as the most popular minister in the cabinet.

But they sparked outrage among rights groups and public criticism from three cabinet colleagues, most notably from Cecile Duflot, the housing minister who is the most senior Green member of the Socialist dominated coalition. Duflot accused Valls of breaching France's fundamental principles and urged Hollande to rein him in.

The cabinet in-fighting and the impression it creates of Hollande being unable to control his ministers has delighted the opposition.

"When you look at this government, you have the impression of watching a drunken boat, you have no idea where it is headed," Christian Jacob, the leader of the centre-right UMP's parliamentary group, said Wednesday.

The Roma issue is the latest in a string of contentious questions which have generated public divisions within the government.

The president is languishing in the opinion polls with an approval rating of only 32 percent according to the latest survey and, in the absence of a rebound, the Socialists are facing heavy losses in their first electoral test since regaining power last year, municipal elections scheduled to take place in March.

Government divisions have also been apparent over industrial policy.

Hollande rejected demands from the left of his party to intervene over the partial closure of the Florange steel plant in eastern France but was left powerless when Industrial Renewal Minister Arnaud Montebourg scuppered a proposed takeover of video sharing site Dailymotion by Yahoo by insisting on the state retaining a controlling stake in the business.

Hollande acted decisively in July when he sacked Delphine Batho as Ecology Minister for speaking out over cuts imposed on her department.

But the dismissal was seen as impetuous and he has been accused of applying a double standard for failing to act against Valls, who has ignored agreed government policy on the Roma.