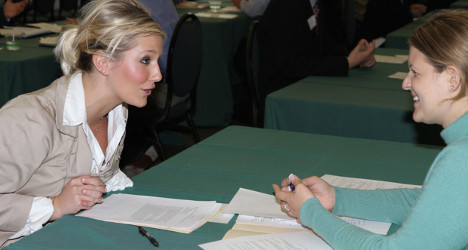 Career advice and workshops, as well as 2,000 top recruiters will be taking CVs at this year's Carrefour Pour Emploi job fair in Paris on Oct 3rd and 4th. Photo: Bpsusf/Flickr

With record numbers, including expats, looking for work in France these days, this week’s job fair at Place de la Concorde in Paris could be just the opportunity many are looking for.

The annual convention, named Paris Pour Emploi organization, will bring together 2,000 recruiters from top French companies, and thousands of qualified and ambitious job-seekers.

Organisers say there will be 15,000 jobs up for grabs over Thursday and Friday.

The fair, orghanised jointly by the local authorities and "Carrefours Pour l'Emploi" has grown over the last decade to become the largest recruitment fair in France. This year's forum will be particularly geared towards helping people with disabilities find work.

“There will be plenty of companies there from all over Europe, looking for English-speakers and applicants who speak a variety of languages,” a spokeswoman from the Carrefours Pour l'Emploi told The Local on Wednesday.

“It’s a huge space, and aside from meeting recruiters, there will be practical workshops on strategies for finding the right job in France,” she added.

The event will feature companies of various sizes and from a wide range of industries (see guide below), and boasts at having directly led to 50,000 hirings in the last decade.

No advanced booking or registration is required and admission is free. Jobseekers should be prepared to walk to find work however, with the fair spread out over 1,000 square metres.

Organisers are hoping to at least match the record set in 2012, when nearly 5,000 jobs were filled and candidates handed in around six CV's each on average.

This week's job fair comes just days after a report from a leading careers advice organization in France revealed that 400,000 job vacancies are going unfilled every year in France, primarily due to a lack of qualified candidates.

The report, by the COE (Careers Advice Council), found that a combination of unattractive careers and under-qualified applicants was causing a shocking number of hiring processes to be abandoned.

As French daily Le Figaro points out, the worst gap between jobs offers and competent candidates is, perhaps ironically, to be found in those French industries suffering worst in the economic crisis.

This means metal-workers, technicians, graphic designers, and industrial mechanics are most in-demand at the moment.

Anyone with questions regarding the job fair is advised to call 01-53-95-15-15. Otherwise, make your way to Metro stop Concorde or Assemblée Nationale between 9am and 6pm on Thursday and Friday, armed with a CV and a firm handshake.

For more details about the event and the companies that will be there, check out this guide (in French).