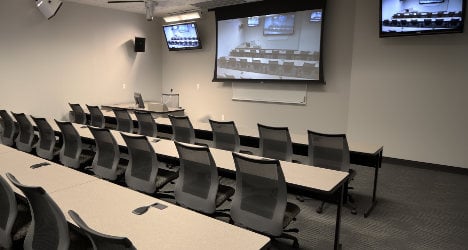 US universities have offered online courses since the 1990s, but on Wednesday France will finally take a giant step forward into the era of digital education. Photo: Acoustic Dimensions/Flickr

American universities have been offering online courses since the 1990s, but on Wednesday France will finally take the giant step forward into the era of digital education.

The announcement comes as a poll published on Wednesday found that French university students are largely unfamiliar with the concept of MOOCs (massive open online courses), as internet-based college classes are often known.

Just five percent of French students, and 18 percent of professors claimed to have an understanding of what exactly a MOOC is, according to a survey conducted by polling firm OpinionWay.

France will have its work cut out in trying to catch up with the US, where eight out of ten universities, including elite Ivy League institutions such as Stanford, Harvard and MIT, offer online courses.

According to French daily Le Parisien, the French government has devoted €12 million to getting the FUN project off the ground.

The Ecole Centrale in Paris, as well as Bordeaux III, Montpellier II and Paris X will be among the universities offering free online courses in biology, computer science and even philosophy, among others, under the scheme.

SEE ALSO: Studying in France – What you need to know

MOOCs have experienced a surge in popularity in the US in recent years, but remain a controversial development in higher education.

As Le Parisien notes, out of the hundreds of thousands who begin online courses hosted by Stanford University in California, just 10 percent formally complete them, with many finding it simply too difficult to continue without being able to ask professors clarifying questions during lectures or in their offices.

"In France, contact with the professor and other students in your class remains an important cornerstone of a degree course," the paper noted.

France has been force to defend the quality and competitiveness of its system of higher education in recent months.

In August, The Local reported how only four French institutions were included in a list ranking the top 100 universities in the world, leaving them far behind their US and UK counterparts.

And in March, not a single French university made it into the top 50 of The Times Higher Education World Reputation Rankings.

“It’s a bit of a blow to national pride," Philip Baty, editor of the rankings told The Local at the time.

Despite this, a plan to innovate by offering more courses in English in France’s universities provoked vehement opposition, before being passed in the National Assembly by French MPs in May.

"A people that speaks a foreign language more and more loses its identity piece by piece," UMP lawmaker Jacques Myard said during a debate on the bill.