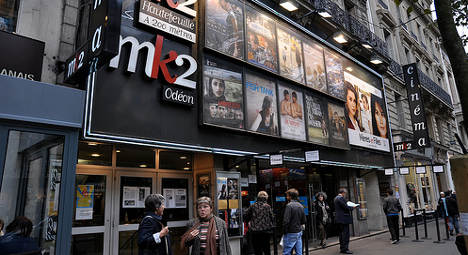 French cinema-goers prefer to watch American movies over those "Made in France," it appears. Photo: imgdive/Flickr

The French film industry may be renowned world-wide but ‘Made in France’ films are no longer drawing the audiences they used to, according to a report by BFMTV this week.

According to BFMTV, audience figures for the 1980s showed that despite the fact that France made half the number of films it does today, they were seen by more people domestically.

That’s despite France producing some highly successful films and box office hits like 'Intouchables' in recent years as well as numerous others which are included in our Ten Must-see French Films of the Millenium. (Click below to see the gallery.) What will hurt French cinema industry chiefs even more than falling audience numbers, however, is the fact that film goers in France are being wooed by American movies.

On average, US films are seen by 595,918 people at French cinemas compared to 488,168 in the 1980s – that reflects an increase of 22 percent and suggests Hollywood movies are now far more appealing to French tastes than “Made in France” films.

The report is likely to add fuel to the debate over whether France simply makes too many films – currently around 300 a year – a large number of which are seemingly failing to cut the mustard.

France’s state auditors at the Cour des Comptes have already lamented that between 2001 and 2010 the proportion of French films seen by less that 50,000 cinema-goers rose from 51 percent to 60 percent.

Auditors concluded: “At the end of a decade which has seen an increase in the number of French films made each year, it is possible to raise questions about the resources made available to films that will only be seen by a limited number of the public.”

France’s Ministry of Culture and the Centre National du Cinema (CNC) however, has dismissed concerns about the number of French films being made, claiming it is necessary to allow the emergence of new talent.

The CNC also argued that “a higher number of domestic films allows a higher market share.”

France is highly protective of its cinema industry, a stance which earlier this year almost led to trade talks between the US and the EU being disbanded.

Paris demanded the audio-visual sector be excluded from any future free trade agreement between the US and the EU, fearing the French film industry would lose out to Hollywood's dominance.

France jealously guards it cultural sector, with French TV stations required to air at least 40-percent home-produced content while another 20 percent must come from Europe.

Cinema-goers pay a levy on each ticket to help fund the French film industry, which many believe could not survive without such support.